Protest against mob lynching continues in Maharashtra ,after Mumbai ,Aurangabad, Latur,Nanded ,Nasik, Beed now Hundreds of Punekars came on streets for the second time On Friday at Bopodi area to demand atrocity law to protect Muslims and  immediate arrest of  killer cow vigilantes under mcoca law.

According to Press release 18 Muslims  have been brutally murdered and several Dalits lynched by the mob in the name of cow .
More than 97% incidents took place in the BJP ruled states and Modi regim.

It says, violent cow vigilantes are specifically targeting Muslim and Dalits youths .Govt should give  Compensation of  one crore to the kin of the deceased innocent Muslims, its adds further.

Nearly six to seven hundred activists of various organizations including children joined the protest march  carrying placards in their hands and black bands on their hands.

President of the kruti samiti and the organiser Anjum Inamdar said, Our people’s safety and security has become serious concern for us .Our prime minister Narendra Modi should initiate action against those anti social elements instead of requesting them. 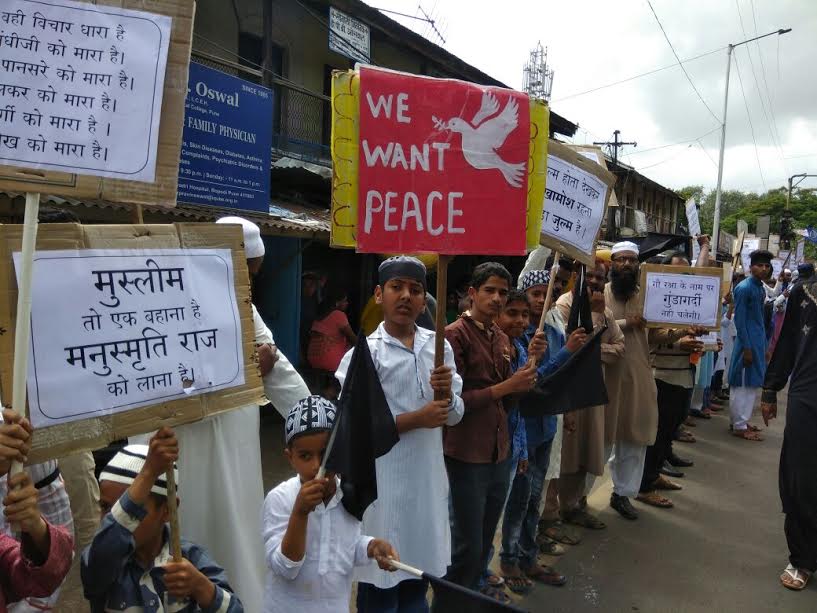 Now we need atrocity law for our protection.Under the banner of   “Not in my name ” we are trying to convey our message to Government, Anjum added.