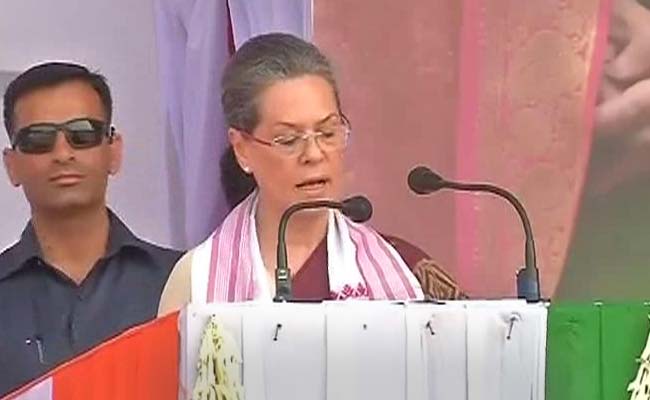 GIVEN a standing ovation at perhaps her last address to a Congress plenary session, Sonia Gandhi on Saturday took on Prime Minister Narendra Modi, calling his government “arrogant” and accusing it of “dramebaazi”.

Taking the podium after an emotional hug from son and new party president Rahul Gandhi, Sonia also called upon the party to work with him to begin a “new chapter” for the Congress in “challenging times”. Congress workers should be “ready for any kind of sacrifice to strengthen the party” and make the country “free from discrimination, vendetta politics and arrogance of power”, Sonia, who led the party for two decades, said.

“The Congress has never cowered before the aggression of power and will never do so,” Sonia said, amidst loud cheers from the AICC members gathered at the Indira Gandhi Indoor Stadium here for the 84th plenary session.

Citing the Gujarat verdict, where the Congress had put up a fight, reducing the BJP’s tally to below 100, and the party’s win in the recent by-elections, the former Congress president said, “Those who want to throw the very identity of the Congress party out of the country do not know how much people love it… There is only one priority today and that is how to make the Congress party stronger. The Congress is not just a party, but an idea several years ahead of its time.”

She recalled how the Congress had emerged stronger after Indira Gandhi returned to the Lok Sabha in the 1978 by-election from Karnataka’s Chikmagalur, after the Janata Party years. Sonia said Rahul taking over the reins of the party, in December last year, was “the beginning of a new chapter”.

“The challenges we are facing are not usual ones. We need to make an India free of corruption and vendetta. Under president Rahul Gandhi, let us pledge that we will make all efforts to do this.” With the party facing one of its worst crises — out of power in all but three states, and down to 48 in the 545-member Lok Sabha — Sonia reminded party leaders that the Congress had bounced back earlier. She talked of the 2004 Lok Sabha win, led by her, with the Congress achieving “what many thought would be impossible”.

She urged Congress workers to launch a struggle to free the country from “the fear of those in power”. Mincing no words to attack the Prime Minister, Sonia said, “The slogans of ‘sab ka saath, sab ka vikas’ and ‘na khaoonga, na khaane doonga’ are only and only dramebaazi (drama) and a trick to grab power… The Congress is fighting the tyrannical Modi government. People have begun to realise that the promises made by the BJP in 2014 were hollow.”

Highlighting the welfare programmes and initiatives launched by the Congress-led UPA, the former Congress chief said, “Under the leadership of former PM Manmohan Singh, the economy of this country flourished. Our government formed policies which lifted millions of people from poverty. And today, the Modi government is weakening these policies. I feel disappointed and sad that the Modi government is weakening the UPA’s welfare schemes.”

Praising Congress workers of states where the BJP is in power, Sonia said the party had been relentless in exposing “fraud” and “corruption” under the Modi regime “with proof”. “Wherever there is a non-Congress government, our friends are taking a stand against anarchy and violence and continuing their work, braving all. It is the Congress that takes a stand against injustice and raises its voice against it.” She added, “The party’s victory will be the nation’s victory, it will be a victory for each one of us. The Congress is not a political term, it is a movement.”