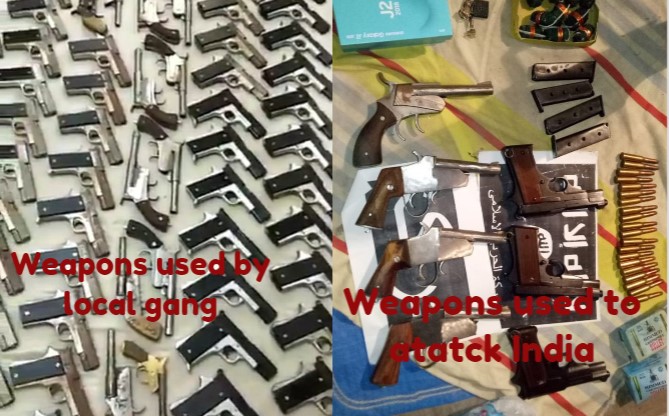 The agency later flaunted the so-called weapons and explosives that it had recovered from the raids. The ‘recovered’ weapons included home-made revolvers also known as desi katta, dozens of bullets and low-intensity bombs that looked more like firecrackers, used in Diwali. The NIA also recovered several A4 sized pages of ISIS logo printed on papers. These printouts can be taken with an access to Google and a printer.

The NIA even coined a name of an organisation, Harkat ul Harb e Islam, which it claimed was planning to wage a war against India with desi katta and firecrackers. Senior government officials familiar with the functioning of the NIA said that Wednesday’s raids had taken place at the behest of National Security Advisor Ajit Doval.

Inspector General Alok Mittal, according to news agency PTI, told reporters that the arrested men were in touch with foreign handlers, whose identity is yet to be established.

Mittal said that searches were carried out in Delhi’s Seelampur locality, UP’s Lucknow, Amroha and Hapur districts where a huge quantity of explosives, a country-made rocket launcher, 100 mobiles and 135 SIM cards were recovered.

As expected, the NIA and Doval became a butt of jokes among journalists on social media. Piyush Rai of Times of India, who covers Uttar Pradesh for his organisation, posted two photos- one of ‘weapons’ recovered in Wednesday’s raids and other of weapons seized from a gang in Meerut some time ago. It was clear that the weapons seized from a small-time gang were of far more sophisticated quality than what the NIA claimed were going to be used to attack India.

He wrote, “The pic on left is the recovery from a local Meerut gang after a consignment was intercepted in Delhi earlier this year. The second pic (right) is recovery made during NIA raids at 16 locations in West UP from would be terrorists plotting country wide attacks.”

Journalist Swati Chaturvedi wrote, “Thank you Ajit Doval, I feel so much safer knowing the ISIS is armed with sutli bombs & local kattas. Less scary than the cow terrorists.”

According to many, the defeat in the just concluded assembly polls for the BJP has prompted the central government to go down the route of ‘India is in danger’ theory in a bid to whip up the sentiments of nationalism ahead of the next year’s Lok Sabha polls.