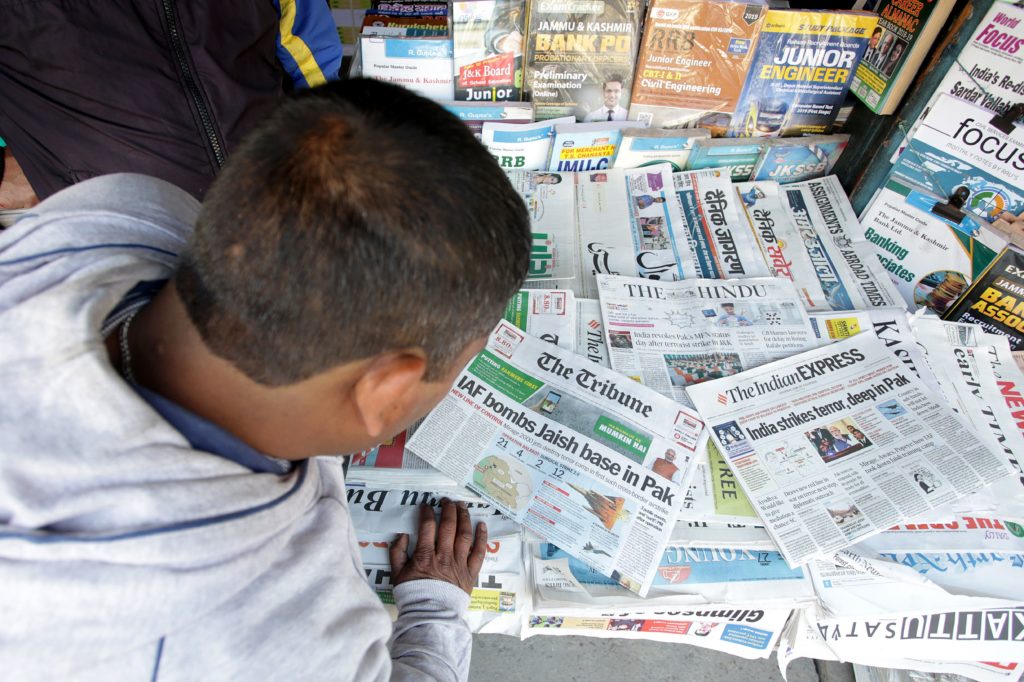 On Feb. 14, an Indian paramilitary convoy was attacked in Pulwama in India-administered Kashmir, resulting in the death of 40 Indian officers. The Pakistan-based militant group Jaish-e-Muhammad soon claimed responsibility. In retaliation, the Indian Air Force carried out an airstrike on an alleged militant training camp in Balakot in Pakistan’s Khyber Pakhtunkhwa province. Indian Foreign Secretary V.K. Gokhale claimed that it “struck the biggest camp” and that a “large number” of terrorists were killed.

Without any official statement on the number of casualties by the Indian government, the Indian news media reported that 300 terrorists were killed, citing government sources. But Pakistan responded by rejecting these claims and told the Associated Press that the area was “mostly deserted wooded area” and that there were no casualties or damage on the ground.

This discrepancy is just one example of the confusion and misinformation spread to the public by deeply flawed media reports.

Our investigation into the Indian media’s reporting on the Pulwama attack found that many reports were contradictory, biased, incendiary and uncorroborated. News organizations such as India Today, NDTV, News 18, the Indian Express, First Post, Mumbai Mirror, ANI and others routinely attributed their information to anonymous “government sources,” “forensic experts,” “police officers” and “intelligence officers.” No independent investigations were conducted, and serious questions about intelligence failures were left unanswered.

The Indian government bears some responsibility for this: Amid this brinkmanship between the two nuclear powers, Indian Prime Minister Narendra Modi did not address the nation directly. The two press briefings by the foreign secretary and Ministry of External Affairs spokesperson entertained no questions.

But the number of anonymous sources willing to disclose classified and conflicting information to reporters who cited them without corroboration points to a serious crisis in how information is reported to the public.

Once we eliminated the spectacle, we realized that the Indian public got very little information about the Pulwama attack and its aftermath. Beyond the confusion over the death tolls at Balakot, news organizations variously reported that between 25 and 350 kilograms of the explosive RDX was used in the attack, when no such information was officially released. Reports also identified different people as the supposed masterminds of the Pulwama attack at various points without clear sourcing.

More than two weeks after the attack, our analysis finds that no news site had rectified the errors in their reporting, leaving these misleading facts as a matter of public record.

Instead, the Indian media has ascribed to itself the role of an amplifier of the government propaganda that took two nuclear states to the brink of war. Many TV newsrooms were transformed into caricatures of military command centers, with anchors assessing military technology and strategy (sometimes incorrectly). Some even dressed for the occasion in combat gear. Speculation and conjecture were repeated ad infinitum, and several journalists even took to Twitter to encourage the Indian army.

This media blitzkrieg resulted in the erasure of two important political trends. First, the escalation in the counterinsurgency war within the Kashmir Valley — under which hundreds of activists were arrested and several Kashmiri civilians killed in gun battles — was grievously underreported. This contributed to the long-running, brutal silencing of Kashmiris and their struggle for self-determination. All too often, the Indian media portrays Kashmiris as terrorists or human shields, not as a community seeking self-determination.

Second, as the media continued to promote government positions on the crisis, other critical political issues dropped out of public scrutiny. The controversy surrounding the Rafale deal and allegations of corruption against the government were suddenly sidelined, as was the order for the eviction of more than a million forest dwellers (that was later stayed) and a hearing on the repeal of an important constitutional clause before the Supreme Court.

The entire episode is emblematic of a broader trend in Indian media. Many news channels are not only owned, operated or invested in by politically influential families, but also are sometimes run for the express purpose of advancing party positions. To make matters worse, between 2013 and 2019, editors of channels and publications have been sacked and replaced, primarily because of their criticism of the ruling Bharatiya Janata Party.

As such, very few media establishments in India have been able to stand against the influence of political leaders. Now, along with the media’s legitimization of an ideology that promotes violence — including riots and lynchings — its performance after Pulwama leaves severe doubts as to whether it is engaged in journalism or the propagation of Hindu majoritarianism.

Without a political solution, Kashmir will undoubtedly emerge in upcoming news cycles. The Indian media must learn to portray the conflict and human rights violations in the region in a more nuanced way, and not reduce Kashmir to a catalogue of death, destruction and emergency laws. More importantly, reporters need to engage with what it means to administer what has been called “the world’s most militarized zone.” Only then can the country answer a more fundamental question: Just what should be done to create conditions that allow Kashmiris to choose their destiny? That, perhaps, is the only way to avoid further destruction in the region.