On Wednesday as may as two hundred women from Muslim community gathered near Moulali Chowk area to demand immediate release of Indian national kul Bhushan Jadhav who has been detained by Pakistan Govt on charges of spying and planning to hang him.

The protest was organized under the banner of yashda Foundation . President of the said NGO Firdos Patel who is corporator, spoke to Millattimes.com and said that  we are Indian Muslims ,we love our countrymen very much. She said , whatever Pakistan is doing in Jadhav case  is totally unfair.

It has to release Jadhav on top priority. Firdos further said, Pakistan is country who always supports terrorism. It always tries to disturb the peace of our nation.

Firdos further thanked her supporter Shoukat Pathan and all the participating ladies and members of her yashda foundation. 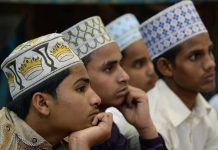