Home Opinion Is it a crime to be a Muslim?

According to media reports that during the recent hearing of the alleged love jihad or hate Islam case in Delhi of a Muslim lady- Hadiya from Kerala in our Supreme Court dated 27 Nov. 2017. “When the bench asked Hadiya to name any relative or any near acquaintance to be named as her local guardian in college at Salem in Tamil Nadu, she said her husband could be her guardian and she does not want anyone else in that role.

“A husband cannot be a guardian of his wife. Wife is not a chattel. She has her own identity in life and society. Even I am not guardian of my wife. Please make her understand,’ Justice Chandrachud said.” [https://www.ndtv.com/kerala-news/wife-not-personal-property-husband-not-a-guardian-supreme-court-to-hadiya-1780827] 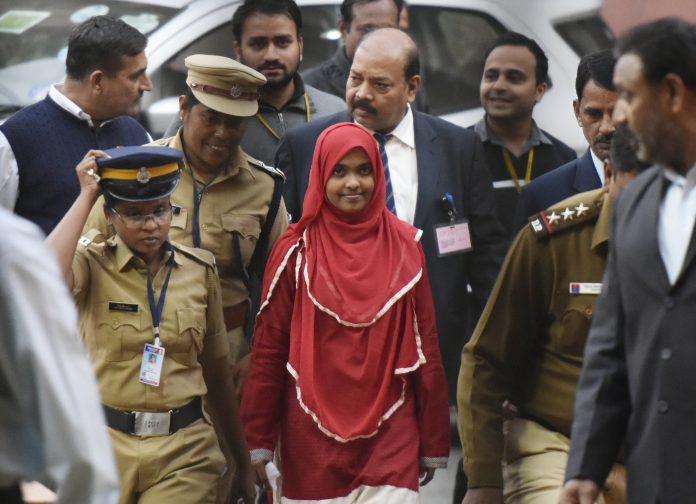 Well, a woman is not a CHATTEL, is an obvious fact, my lord. A father, mother or a near relative is a guardian of a child doesn’t mean the child is a CHATTEL either.

A wife is a wife. A sister is a sister. A mother is a mother. A daughter is daughter only. Any woman is simply a woman. How her guardianship by a male member would reduce her into a CHATTEL?

The honorable apex Court has asked the question about guardianship to Hadiya. She did not. Why would a free, adult, educated and sane woman need a guardian at all, if the Court considers to be in anyone’s guardianship is to be a CHATTEL for a wife or any kind of degradation on part of a dignified lady?

However, the Apex Court genuinely wanted an answer from Hadiya and wanted to give her in someone’s guardianship. That’s what its succeeding order revealed.

Let’s assume for a while now. Hadiya’s answer to the question on her guardianship was not what she gave. She, for instance, named her guardian someone other than her Muslim husband, say someone from her non-Muslim relatives. What would have been the honorable court’s reaction then? Would it object to it and argue saying ‘a woman is not a CHATTEL, thus guardianship is ruled out?

The court has granted Hadiya’s guardianship to the Dean of Sivaraj Medical College in Tamil Nadu!

Does it mean if a Dean is a guardian of a lady then she is not a CHATTEL but if her husband becomes her guardian then only she would be degraded into the status a CHATTEL and it would go against her ‘own identity in life and society’?

Personal freedom, freedom to profess a faith of one’s choice and freedom to marry a man or woman of individual choice with mutual consents are some of the rights, paramount in our constitution and hallmark of our secular democracy. It is striking to note that a husband and a wife cannot live together only because some other people are not happy with it!

The Supreme Court of India, the most high and the most gracious temple of respect and wisdom that we have in our great country. These questions are actually not going down well in common Indians.

Lady Hadiya is a Muslim. Her official husband is also a Muslim. Is it a crime to be a Muslim?

Muslim scholars say that it has been in their scriptures that a husband is fully and completely responsible for care-ship of his wife and children. They say, it is the duty of a husband to protect, feed and clothe his wife by all means possible. If he doesn’t take care of his wife for a reasonably long period of time, he even ceases to be a husband, the Muslim scholars and experts of family laws explain.

I am sure; the honorable apex court of India might know all these even better than many, for, this honorable court has been ensuring ‘nafqa’ (maintenance) by its orders for Muslim women divorcees from their previous husbands even beyond iddat periods, in some especial cases, on this very basis that husbands are caretakers of wives.

We are little confused as who can be a better guardian of a wife – the husband who is legally and religiously duty bound to take care of her in all aspects of life or the Dean of a college who takes charges for everything he provides to his student? We cannot and do not doubt the intention my lord, the honorable supreme court, but we are struggling to comprehend the wisdom of its CHATTEL theory against guardianship of a free, adult and sane woman vis-a-vis a Muslim wife!