Home National The Imam Who Saved Not Just Asansol, But Perhaps India From Burning 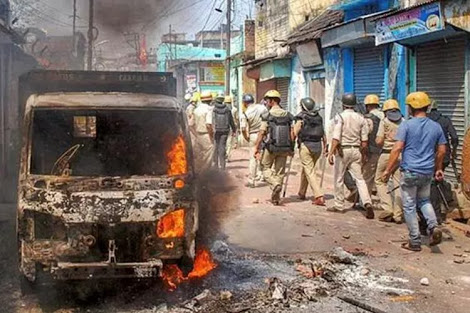 “My son has lived his life, do not bring sorrow to other homes”.

Imam Imadadul Rashidi’s voice was matter of fact when contacted by The Citizen, as if what he had done was what any one would do. Asansol was in the grip of violence threatened by a tornado as the Muslims started gathering to retaliate against the violence triggered by Ram Navami processions. Why? Because the Imam’s 16 year old son had been brutally beaten to death by a communal mob, and the news of the incident had spread like wildfire across the town.

The crowds gathered, with now the police and the state government aware of their own helplessness, when the Imam addressed a congregation of thousands at the funeral prayers of his son Sibtullah Rashidi who had just appeared for teh Class X Board examinations. With his son’s body lying before him, the Imam pleaded for peace in a short address that had the entire crowd in tears, with all then dispersing for their respective homes.

As he told The Citizen this morning, all he said was, “my child has lived the life that Allah ordained for him. Now please ensure that no one else’s child is killed, that there is peace and amity. If you love him, and me, do not turn to violence, but keep peace.”

Asked how difficult a statement this was Imam Rashidi said quietly, “ no it was not, it was clear to me that my child had died, there was nothing we could do about that, and it was thus my duty to ensure no other child died, no house was torched, no family bereaved.” He said he was responding to the anger in “my” Asansol, where people were bent on taking revenge. “I knew I had to stop this, I knew this was necessary for harmony in my shahr (town) and in my country” he said.

“I knew my child has lived the life Allah had marked for him, I pleaded with the people not to kill anyone else’s child, “ he said. The Imam made it clear to the congregation that “if you do not listen to me I will leave Asansol and go away.” He said he was firm about that, as he could not bear the thought of more violence and bloodshed.

The Imam said that he told the people exactly what he believed. “Islam is a religion of peace and amity, it does not preach violence and revenge,” he said. Asked what he would like to convey to the country where communal harmony is currently under stress, he said, “ I would only say please do all you can to ensure there is peace and unity. And no one is able to break that.”

Local Asansol Councillor Nasim Ansari said that he had attended the prayers like everyone else. There was not a dry eye after the Imam spoke for “maybe just seven or eight minutes”. He said they could see the anger being replaced by deep sorrow as the congregation dispersed and all made their way peacefully home.

Ansari told The Citizen that the Imam spoke in measured tones but from the heart. His words “tore through the anger” and diffused it. He said that there was deep worry across the administration and the state as the Muslims reacted to the brutal death of young Rashidi, and a realisation that the storm if it burst would not be controlled easily. The Chief Minister had replaced police officers in the district, bringing back those who enjoyed a better rapport with the people at large. Even so the murder of the Imam’s teenage son seemed to be a turning point, with the Muslims after four long years, prepared to face the consequences of retaliatory violence.

As Ansari said, “I cannot even begin to say what might have happened across India had it not been for the Imam.” Subsequently, he said, “we have been able to go back to restoring peace, returning cattle, and speaking to both communities.” Ansari himself was under fire even as he was speaking to this reporter, for his mediation efforts but as he said “these are just a handful of lumpens, we have them in all communities but the situation now is dramatically improved.” He fought the local polls as an Independent but has subsequently joined the Trinamool Congress.

The Imam’s son, as per verified reports, was taken away by the mob in Rail Par area of Asansol. His elder son alerted the family who tried to get police help. The delay on the part of the police to act, as has become customary in all such incidents now across India, led to the brutal bludgeoning of the young boy who was killed on the spot by the instigated mob. Fake news, videos, rumours were being spread through out Asansol to “provoke” the majority community to react with violence, as per the local administration.

Asansol has a MP from the Bharatiya Janata Party Babul Supriyo who is currently warring with the state government for not allowing him free access to his constituency. The last communal violence in Asansol was in 1991-92, after which it has been peaceful until the last few years when efforts to stoke communal fires succeeded in thsi Ram Nevamil celebrations with weapons, and provocative slogans. The violence has continued unabated, and the area remains tense.