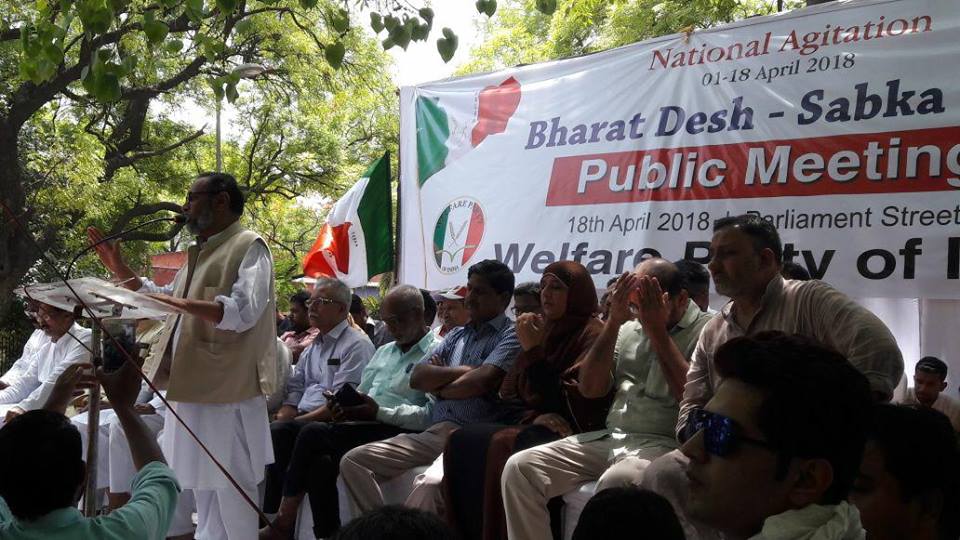 Welfare Party of India national president Dr. S.Q.R.Ilyas strongly chastised Prime Minister Narendra Modi and RSS for dividing the country on communal lines. “An atmosphere of fear and mistrust is being created in the society. Attacks against Muslims and Dalits have increased manifold and graph of communal disturbances are mounting up. The country had to bow down its heads in shame before the international community over the brutal rape for days and killing of an innocent eight year old girl and the manner in which the incident got official support. India has become selective and majority is being excluded in the name of religion, caste, development etc.

The national agitation has seen wide anger and resentment against the polarization politics and observed people’s resolve to work and strengthen plural and united India.” Dr. Ilyas inaugurated the grand rally.

Earlier delegates from all over the country carrying placards and chanting slogans and songs marched from Mandya House to Parliament Street. The meeting was inaugurated by Rashid Hussain National convenor of the campaign.

Dalit activist and Party general secretary K. Ambuzakshan said constitutional institutions and values are being submerged and the nation has been nosediving towards anarchy.

S. R. Darapuri former DGP UP Police called for joint movement as like the freedom movement to save the country from communal and corporate forces.

Prof. Ram Puniyani well known Dalit scholar stressed the need for deep study of fascism and its strategies. He called for long-term strategy to counter its menace.

Dr. Prem singh national president socialist party of india told it is the very fundamental issue of survival of the nation with its diversities. He called for sane elements of the majority community to disown the inhuman activities of Sangh elements.

Welfare Party national leaders and the delegates demanded for protection of women and strict penal action against atrocities against women, for due representation of for Muslims in parliament and legislative assemblies as per population, for repeal of all draconian laws, for ensuring transparency of all constitutional Institutions and for roll back of EVM and bring back paper ballot system.