Home National Gift your sisters a sword so they can behead love jihadis: Sadhvi... 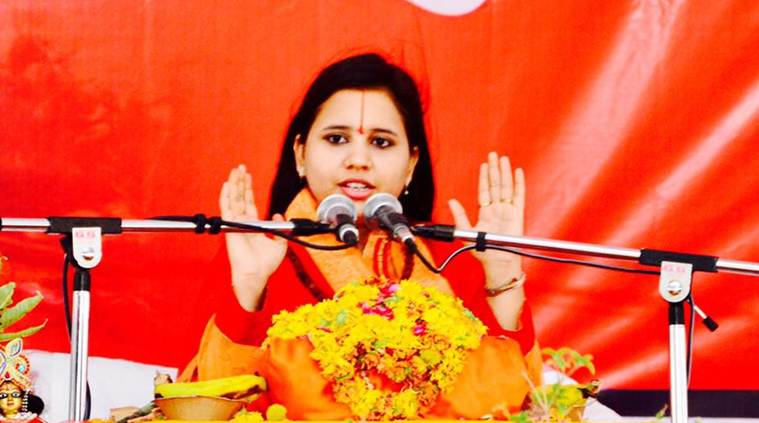 A case under non-bailable sections has been registered against Sadhvi Saraswati, a Hindutva hardliner, for making divisive comments aimed at promoting enmity and hatred between religious communities at a gathering in Kasaragod district in the state. The case has been filed at the Badiadka police station in the district, four days after the controversial preacher made the remarks at a public gathering.

An officer at the police station told indianexpress.com that the case under sections 295(a), 153 and 506 of the IPC has been booked against the sadhvi in response to a complaint by a private individual. He said that police has begun an investigation and is looking at gathering evidence of the remarks that were made at a function called the ‘Virat Hindu Samajotsavam’ organised by the Vishwa Hindu Parishad (VHP) at the Badiadka-Bolgatta ground. Close to 10,000 people were reported to have attended the function.

In continuation of such vitriolic statements, she went on to say that those who indulge in the slaughter of cows must be similarly slaughtered in public. Her remarks alluded to the consumption of beef in the state. She also added that no force can stop the construction of a grand Ram temple in Ayodhya.

The sadhvi, who is no stranger to making controversial statements at public rallies, is the president of the Sanatan Dharma Prachar Seva Samiti and hails from Chhindwara in Madhya Pradesh. Her father was the Vidarbha convenor of the Bajrang Dal and from a young age, she has been associated with the activities of the RSS and the VHP.

In March 2015, a similar case was registered against her for making provocative statements at a function in Mangalore in Karnataka