Home ‏Muslim World The #Pashtun discontent: A road to #Pashtunistan or the pre-election politics? 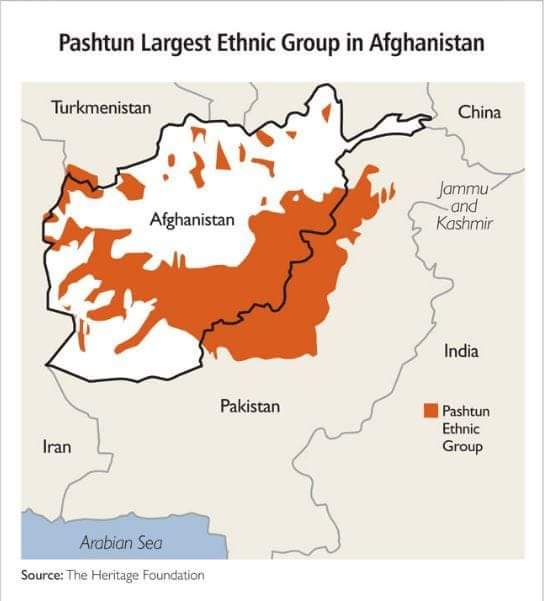 Pashtuns are an Iranic ethnic group who mostly live in the region of Pashtun homeland which was divided and distributed with a Duran line border by the #British Empire between #Afghanistan and #Pakistan. As an important minority group in Pakistan, Pashtuns constitute the second-largest ethnic group or about 15% of the population. And in Afghanistan they are the largest ethnic group. It is estimated that at least 70 percent of the region’s population live in poverty, the Pashtun literacy rate is just 10 percent for women and 36 percent for men, and the infant mortality rate is Pakistan’s highest.

Pashtuns, mostly Sunni Muslims, are one of the ill-fated ethnic groups on the planet nowadays. Cursed with poverty and illiteracy, they are also the direct victim of American led and Pakistan military braced ‘war on terror’ strategy in Afghanistan and Pakistan. The reality is very grim for them as Pashtun tribesmen have been taking fire; their homes, property and livelihoods have been destroyed; they have lost their families and children in this brutal war.
The Pakistani military have launched 10 operations against ‘militant strongholds’ in the region since 2001. According to the United Nations refugee agency and the Geneva-based Internal Displacement Monitoring Center, those Pakistani military offensives had displaced almost two million Pashtun people from their homes. Recently, Pakistani Army has said that it is now spending millions to repatriate displaced people, rebuild infrastructure and earn residents’ good will.

The latest long march and the follow-up movements of the Pashtun tribe have been organized by Pashtun Tahafuz Movement (PTM) which was established in 2014. According to some media report, the PTM is comprised of mostly the Pashtun nationalist Awami National Party (ANP) activists. But the truth is Pakistan People’s Party (#PPP) and ANP had supported US- Pakistan’s so-called war on terror. Interestingly, those #ANP elements are now demanding that Pashtun tribesmen held by security agencies should be released, the area should be cleared of mines and security check posts in tribal areas should be removed in order to pacify Khyber Pakhtunkhwa province’s Pashtun majority electorate.

Therefore, the plights of the Pashtun people are real but the #PTM strategy to address the state-discrimination against the Pashtuns is doubtful. The Pakistani society is also in quandary in understanding and mitigating the issue since any political disturbance is being considered as a result of outside influences nowadays.

Since Pashtun struggle is real, PTM is new and its charismatic leader Manzoor Pashteen is widely accepted as a new generation political leadership by the Pashtuns and the west, there are good chances for the PTM to create sufficient political pressure for the Pakistani government to meet their demands. If the authority starts to play dirty with this political force, the situation can turn grave against them and it will open the door wide for foreign players for a ‘Pashtun Spring’ aimed to create a separatist movement.

Nonetheless, some analysts believe that the protests would not lead to real change for Pashtuns since they consider it a pre-election mobilization, not an uprising.

PTM’s strategy is doubtful since most of the leadership and activists are from ANP who supported the Pakistani Army offensive in the name of American war of terror in Afghanistan and Pakistan. On the other hand, the Afghan political establishment has been praising the movement and a part of it wants to annex the Pashtun tribe dominated regions of Pakistan.
In February this year Haroon Hakimi, an Afghan diplomat in Washington expressed Afghan ambition in Pakistan politics by twitting that “awakening of tens of millions of Pashtuns is an important step for weakening the violence and bringing peace to both sides of the Durand Line and region. The world should support it”.
Ryszard Czarnecki, the former vice president of European Parliament wrote an article that was published in May 2017 in The Pashtun Times; there he noted that “Pashtun-dominated tribal areas and portions of Pakistan that were forcefully taken away and merged into British India need to be restored to their earlier status as the sovereign territory of Afghanistan.” It is clear that the redrawing the Duran line would be in the best interest of the United States, #NATO and Afghanistan.

Since Pakistani power establishment is suffering a setback with the US and approaching rapidly to the #Chinese sphere of geopolitical influence, the #US and her local allies (#India and Afghanistan) may try to put immense political obstacles to change the course of Pakistan’s foreign policy. And the legitimate struggle of Pashtun’s can be sabotaged and used as a pretext to push Pakistan further into the security quagmire. Therefore, the Pashtun movement has the potential to appear as a foreign backed ‘color revolution’ to destabilize Pakistan for global payer’s geostrategic ambition.

As an ethnic minority, Pashtuns are viewed as the victims of state discrimination in Pakistan. This latest protest made a significant political impact in dealing with the Pashtuns. The youthful non-violent movement is also welcomed by many Pakistani intellectuals since it is in total contrast of ‘aggressive and extremist’ Pashtun political image. At the same time, the western media’s glorification of PTM and its leaders gave an enormous strategic value to the movement.

On the other hand, as the largest ethnic group, Afghan Pashtuns think that redrawing the Durand line, to merge #FATA (Federally Administered Tribal Areas), #Pakhtunkhwa and parts of #Balochistan into Afghanistan could help to end the blood spilled in this region, therefore, they will continue to support the Pashtun’s movement as long as they can.
Consequently, the Pashtun movement may emerge as a big political force in Af-Pak region if Pakistani authority shows reluctance to mitigate the crisis peacefully.

He is a Bangladesh based Geopolitical analyst and Strategic thinker.