Home ‏Muslim World The US and Afghanistan: can’t win the war, can’t stop it, can’t... 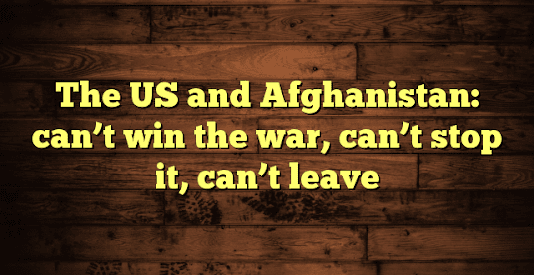 The latest, dreadful suicide bombings in Kabul and Kandahar, which killed more than 50 people on Monday have again focused attention on the continuing failure of American-led efforts to stabilise the country. After 16 years of conflict, critics say, the US is in a triple bind: it cannot win the war, it cannot halt the war, and it cannot leave.

As civilian casualties rise, and with no sign that recent American and Nato reinforcements are making a difference, an already dire security situation is growing more complex. Part of the problem is that Islamic State and the Taliban appear to be competing for the title of “most feared terrorists”. Isis claimed Monday’s twin explosions in Kabul, and last week’s attack on a voter registration centre that killed 60 people. But it was the Taliban who perpetrated two infamous atrocities in January. In one, an ambulance packed with explosives blew up, killing nearly 100 people. In the other, Kabul’s luxury intercontinental hotel was turned into a battlefield.

Last week, the Taliban launched their 2018 spring offensive, threatening ever greater mayhem. According to US estimates, government forces control less than 60% of Afghanistan with the remainder either contested or under the control of the insurgents.

Another problem is the terrorists are now specifically targeting Afghanistan’s fragile, fledgling democracy. Hence the repeated attacks on government ministries, organisers of October’s parliamentary and district elections, and journalists working for independent local and western media.

Every new act of mass murder in a high-profile public location weakens the authority, at home and abroad, of Ashraf Ghani, Afghanistan’s besieged president. Ghani unveiled an ambitious peace plan in February, offering an immediate ceasefire and unconditional talks. The only reply he has received so far is a wave of bloodshed. Ghani is not alone in his impotence. Last August, Donald Trump unveiled a “fight to win” strategy, reversing his previous hands-off stance. Trump deployed an additional 3,000 troops, increased the scope and autonomy of counter-terrorism operations, and asked Nato allies to do more to help.

Trump’s intiative has proved almost as ineffective as his decision, a year ago last month, to drop the “mother of all bombs” (officially, the massive ordnance air blast or MOAB) on a supposed Isis cave and tunnel complex in eastern Afghanistan. Trump boasted of a big victory, lending new meaning to the word “bombastic”.

Rather than curb the violence and enforce the peace, Trump’s green light for greater use of armed drones, quick-fire US air force strikes and special forces counter-terror ops appears to have had the opposite effect. According to UN figures published in February, a rise in the number of undiscriminating attacks last year contributed to more than 10,000 civilian casualties, including nearly 3,500 killed. As in the past, most of the casualties were caused by insurgent action – but by no means all.

In the absence of a holistic US strategy, Afghanistan risks becoming one large training ground and weapons testing site for the American armed forces. Trump is now reportedly reverting to his previous sceptical stance on the Afghan imbroglio. Rand Paul, a Republican senator known for isolationist views, said Trump agreed the US should forget “fight to win” and cut and run instead. “The president told me over and over again in general we’re getting the hell out of there,” Paul told Washington Post on this week. Trump’s apparent volte-face, channelling the Grand Old Duke of York, mirrors his recent, impulsive decision to pull US troops out of Syria.

More serious students of America’s Afghan dilemma believe that whatever Trump may say, the US is stuck there indefinitely. It is broadly accepted in Washington that the war cannot be “won” in the conventional sense. Nor can it be halted, given the refusal of the insurgents to discuss peace, its growing, Syria-like complexity and Trump’s disdain for diplomacy.

“A simple win-loss dynamic is the wrong way to think about the war. America’s not in Afghanistan to win. It’s there to hold the line,” said Nicholas Grossman, professor of political science at the University of Illinois, writing in National Review.

America’s aim was no longer democratic nation-building, as in the era of George W Bush, Grossman said. There was no ideal end state in view. But the US had no choice but to stay in order to prevent jihadist groups filling any future vacuum, as happened in Iraq; to keep the Iranians and Russians out; and to keep Pakistan honest, stable, and in the US column. As the death toll mounts and the elected government weakens, the sum of America’s shrunken Afghan ambition appears to be: hang on in there – and fingers crossed.