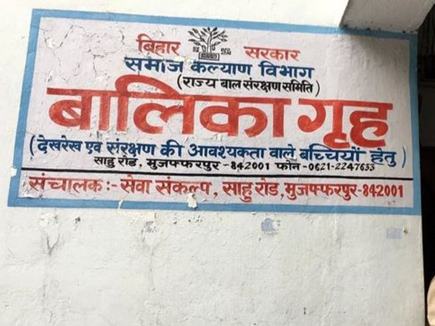 A seven-year-old deaf and mute girl with injuries all over her legs and arms narrated her ordeal before a magistrate in Muzaffarpur last month. A fellow inmate translated her frantic signs into numbing words for the judge, detailing sexual assault on her. She was among the youngest victims of what has come to be known as Bihar’s ‘house of horrors’, and hers was only one of the many shocking stories of serial abuse and political patronage gone monstrously wrong.
The shelter home, the scene of the repeated crimes run by the main accused, Brajesh Thakur, is a dimly-lit five-storey structure with just two windows and a thin strip of glazed glass on the third floor, where 46 girls aged between six and 18 years were housed in a 70 feet by 25 feet hall.

A woman helper, Kiran, stayed with the girls here and, according to the testimony of many girls, also sexually preyed on them. Two rooms adjoining the hall are suspected to be where men arrived ach night, and where Kiran took the girls who had been heavily sedated after dinner. Two neighbours told ET on condition of anonymity that many a time they heard cries of children in the night but never dared to question Thakur given his notoriety as a strongman. “We hardly ever saw the girls, neither on the terrace nor downstairs,” said one neighbour.

Thakur’s newspaper, Prataya Kamal, ran from the same premises. A Bihar Human Rights Commission calendar hangs over the gate and reams of newsprint lie stocked in the basement here.

The shelter home is now sealed but a police report prepared after a search, which ET accessed, points to a clear design to hide the sexual crimes committed here over years. There is a narrow entrance through a single door to the entire building and there are multiple iron gates on each floor.
The ground floor was said to be the office, with a room for counselling; the first floor was said to have a ‘sick room’ and ‘staff room’ while the second floor had a big kitchen as well as a ‘study room’ and a ‘library’ for the inmates. But all this was apparently a cover for the crimes taking place on the third floor.

Thakur lived next door to this building, in a house that was distinctly different, with open grills and visible staircases. His house also lies locked now, now that he is behind bars and his family has moved elsewhere to escape the wrath of locals and the media spotlight.

EARLY WARNINGS WENT BEGGING
An early red flag raised in December 2016 over this shelter home, which is just two kilometres from the nearest police station, had gone begging. A doctor posted newly to the town went to this shelter home then for a routine check and noted in his report to the authorities that the inmates “were irritable and scared and they needed a family atmosphere”.

The doctor’s report got buried under Thakur’s clout, a local newspaper editor told ET. Another warning came in November last year when a team from the Bihar Child Protection Commission visited this shelter home. “The girls started crying on meeting the members of the commission. They complained of no arrangements for them to study or pursue any skill development,” the team said in a report. But clearly, the authorities did not bother to comprehend the gravity of the situation. It took a visit by the Tata Institute of Social Sciences team here in February to unravel the sexual abuse.

ANOTHER HOUSE OF HORRORS
Barely 150 metres away is another shelter home, also run by Thakur, from where 11 women aged between 21-48 years and four children have gone missing. It took Bihar Police almost two months to raid this second shelter home, three days ago, although it raided the first one on May 31 and knew about the second one since June 10. Police on Wednesday evening seized packs of condoms, empty liquor bottles and a pile of sedatives from this shelter home too, pointing to a similar modus operandi here. Inside a congested lane, this premises also lies sealed now.

But Thakur’s clout apparently extended even after his arrest on June 2. The police never got his custody for interrogation as a POCSO (Protection of Children from Sexual Offences) court sent him to judicial custody a day later.

Thakur spent the next 14 days in district hospital complaining of uneasiness. While the Central Bureau of Investigation has now taken over, police only got to question him just once in jail where he denied all charges.

TESTIMONIES OF TRAUMA
Testimonies of many children show that they were too young to even understand what was happening with them. Many said they would just wake up with lot of pain in their private parts after falling to sleep the previous night – probe now reveals their dinner was invariably spiked with sleeping pills before they were taken to the two rooms adjoining their sleeping hall for sexual abuse. A huge stock of sedatives has been seized from here.
Any attempt by the girls to see through the glazed glass in their barrack or to go to the terrace led to the female warden or Thakur beating them, the girls testified before a magistrate.

Counsellors and members of the district child protection committee – who were supposed to look after the welfare of the children – have been named in their testimonies for sexually abusing them. The chairman of the district child protection committee, Dilip Kumar Verma, has in fact been accused of regularly visiting the centre and routinely sexually abusing the children – the children identified him from his photograph shown by the police. He is on the run.

“These are children who had literally no voice – they had either run away from home, had no families or had been abandoned by their parents. All arms of the state failed them,” said a local journalist.
The victims were as young as a child of six years, one of seven, four were eight-year-olds, five were 10-year-olds and rest between 10 and 18 years. All of them are now being counselled by doctors from Patna and Delhi’s All India Institute of Medical Sciences to relieve them of trauma.
Written by: Aman Sharma
Courtesy: Economic Times