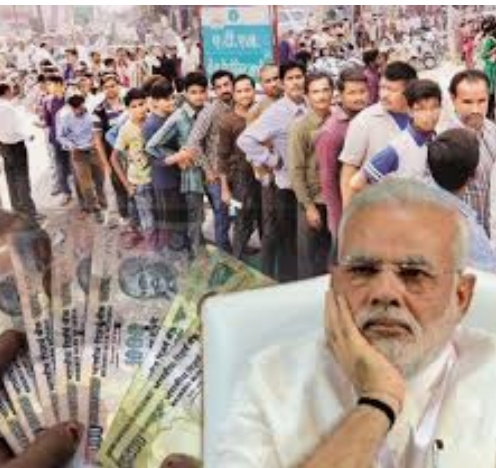 “India will discover, no matter how the government tries to hide it, that demonetisation wasn’t just an ill-conceived and poorly executed economic policy with ‘innocent intent’ but a carefully planned, criminal financial scam,” he said in a statement. The people would not rest until they found the “full truth.”

“On the second anniversary of the Prime Minister’s monumental blunder, the government’s spin-doctors, including our incompetent Finance Minister, have the unenviable task of defending an indefensible, criminal policy,” he added.

On Twitter, he said it was a “brutal conspiracy and a shrewd scheme” that allowed Mr. Modi’s “suit-boot friends to convert their black money into white”.

Mr. Gandhi said that the worst affected by demonetisation were the poorest of the poor, who were forced to queue for days to exchange their meagre savings. “[Prime Minister Narendra] Modi’s demonetisation cost India over one-and-a-half million jobs and wiped out at least 1% from India’s GDP,” he said. More than 120 people lost their lives, small and medium businesses were smashed and the informal economy was devastated.

“Demonetisation was a tragedy. India has faced many tragedies in its past. Many a time have envious, external enemies tried to hurt us. But demonetisation is unique in the history of our tragedies because it was a self-inflicted, suicidal attack that destroyed millions of lives and ruined thousands of small business

“From a war against counterfeit currency and terrorism to permanently removing the scourge of black money and from increasing savings to forcing a shift to digital transactions, not a single stated objective of the government has been met. All that was accomplished was a disaster,” he said.

“November 8th will forever go down in the history of India as a day of infamy. With that one declaration of demonetisation, Mr. Modi took 86% of India’s currency out of circulation, bringing our economy to a grinding halt,” Mr. Gandhi said.