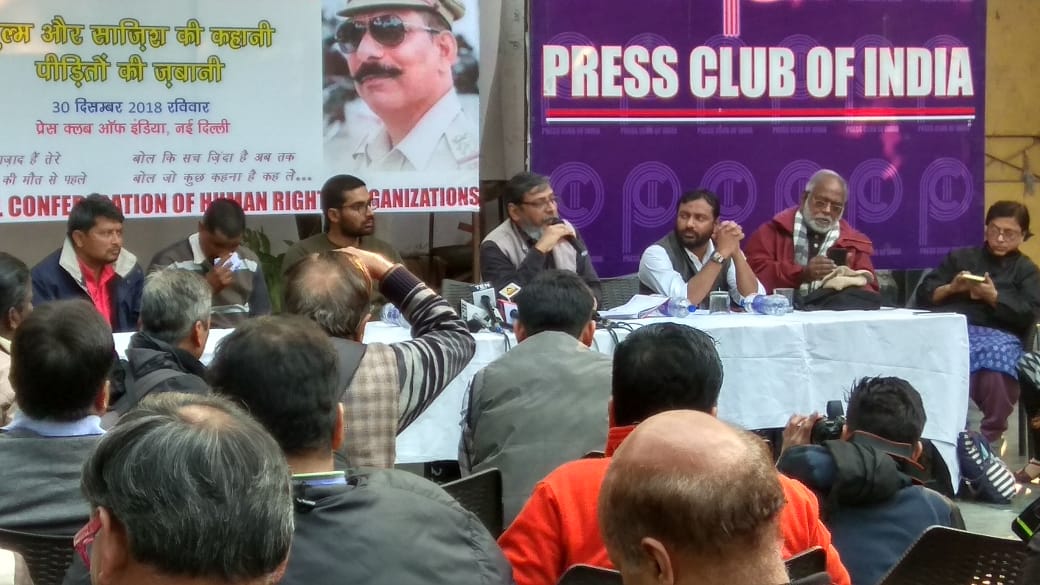 MT News Network,New Delhi:30 December 2018:A team of civil society members comprising journalists, social activists and academics a the initiative of NCHRO visited BulandShahar where violence broke down on 3rd December 2018 in the name of cow carcasses.

An inspector and a youth were killed by the violent mob. Several innocent people including minors are put behind bars but the chief accused of the murder is still at large.

The team visited to all spots connected with the incidents, spoke to all concerned people and came to the conclusion that it was a planted incident to create unrest in the area and elsewhere in the name of cow and in the wake of the large religious gathering ‘Iztema’ that was held at the distance of 50 kilometer from the spot.

The team understands that because of the ongoing elections in five states the Hindutwawaadi forces, in order to polarize the voters, masterminded the Bulanshahar incident. Despite the police, particularly, Inspector Subodh Kumar Singh, the officer on duty took all the measures to avoid the violence and assured to take action immediately still the mob, at the instigation of local Bajrang Dal and BJP Yuva Morcha leaders Yogesh Raj and Shikhar Agrawal gathered at the Chingawati police post and burnt down many vehicles, staged a shoot out and pelted stones on the police force.

Team members and senior journalist *Kiran Shaheen* said in press conference in the FIR written by Yogesh Raj stated that Sudhef Chaudhary, Ilias, Sharafat, Anas, Sajid, Parvez and Sarfuddin resident of ‘Naya Baans’ police station were cutting the cow in the District Bulandshahar. According to the report, Mr Raj ran away from the spot after seeing them raise their voices. According to Tahrir, Yogeshraj and the accused are from the same village. However, according to Tahrir, the names of Anas and Sajid, who were under 12 years of age, got involved. At present, some youths have left the village in the name of Gokshi.

Team member and secretary of the NCHRO *Advocate Ansar Indori* pointed out in press conference the occurrence of such a big incident in the presence of the administration proves that it was a planned affair. Police presence deterred the violence from spreading further. The murder of a police officer at the hands of the mob occurred as he was executing his duties.

Team member *Dr. Bhavna Bedi* of Delhi University said that Inspector Subodh Kumar lost his life in order to defeat the conspiracy of the Sangh workers. These Hindus, working alongside Muslims, were also targeted by these Hindu organisations.

Team member from AIPF, *Manoj Singh* said in press conference in a peaceful area like Bulandshahar, the December 3rd incident was a targeted attempt by Sangha-BJP organizations to instill fear in the Muslim community. According to the facts, small skirmishes between local groups were used as an excuse to start communal clashes. There are clear signs of political conspiracies at play to discourage honest members of the administration, like Inspector Subodh, through intimidation and fear for life.

Team members ask in press conference the way in which the video of Inspector Subodh Kumar’s murder was shot clearly indicates that the mob received political protection of the Yogi-Modi government. They have been emboldened to kill even police officers openly’. The current environment is such that even the police force, which is supposed to protect the common man, is not safe. The future of thousands of children is also at stake. Parents in the locality have prevented them from attending school after this sort of violence.

Most importantly, there were no signs of cow cutting at the spot. That makes it clear that the mob violence and murder of Inspector Subodh aimed to create an atmosphere of fear in the Muslim community, and was executed through meticulous planning.

The fact finding team released the detailed report at a press conference here in Delhi.