Home Breaking News The colour of the BJP in the Kashmir Valley is Green, not... 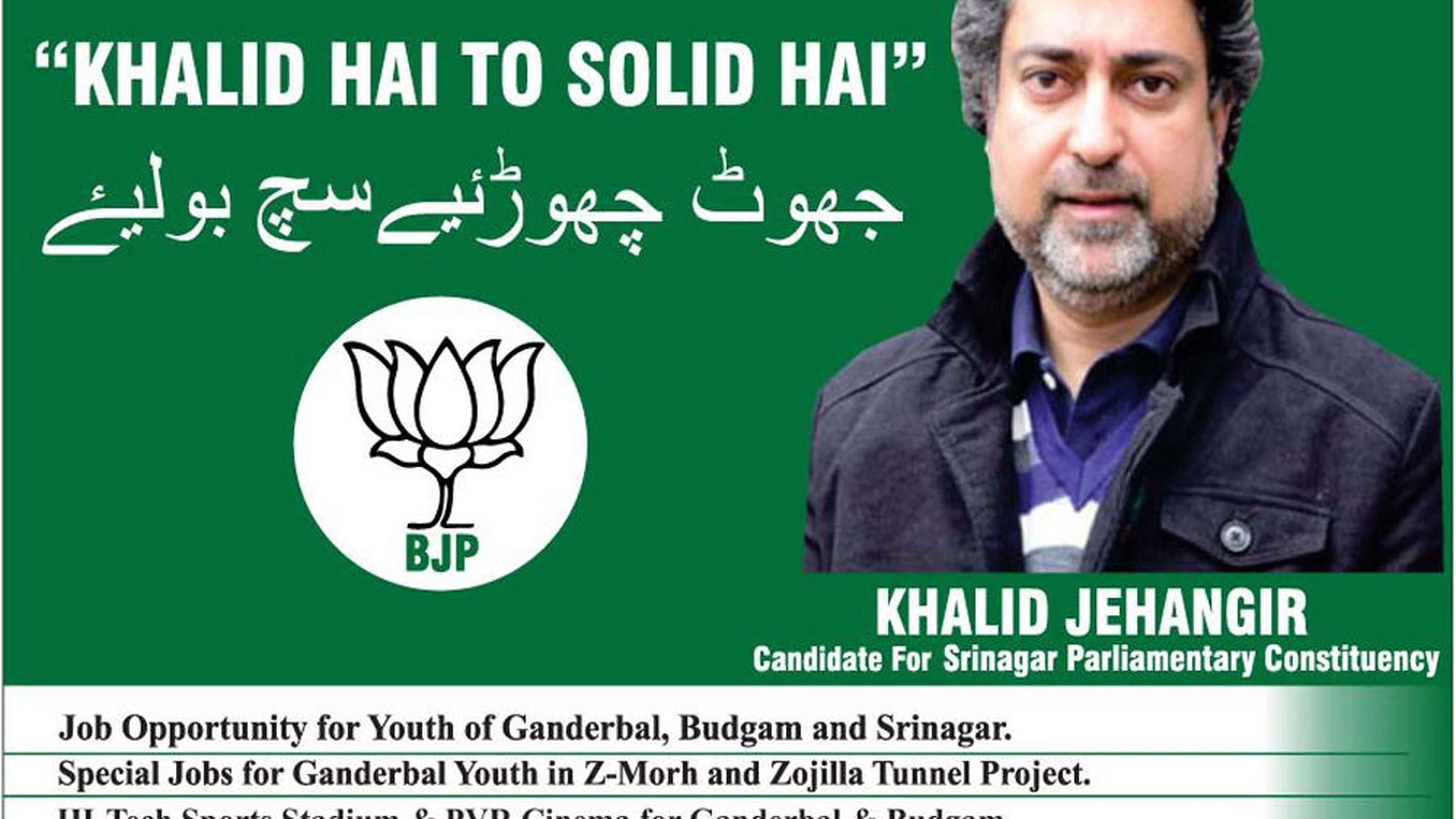 The colour of the BJP in the Kashmir Valley is not saffron but green.

The BJP has issued poll-related advertisements in local newspapers that don’t have even a trace of saffron but is full of green, a colour preferred by many in Kashmir because of its association with Islam and Pakistan. Many believe that green was Prophet Mohammad’s favourite colour. Green is also the colour of the Pakistani flag.

Advertisements that have appeared in prominent newspapers have appealed to people to vote for the BJP’s candidate for the Srinagar Lok Sabha seat — Khalid Jehangir.

Not only is green the background colour of the ads, the acronym BJP has been painted in green. The lotus, the electoral symbol of the BJP, is painted in white, as it usually is.

A portion of the BJP flag is green, but it is predominantly saffron, the colour intrinsically associated with the party.

The ads have a catchy slogan and say in Urdu: “Leave Lies, Speak Truth.” An appeal in Urdu says “Vote for BJP”.

The advertisements have a picture of Prime Minister Narendra Modi at the top.

The ads have also appeared in Greater Kashmir and its sister publication Kashmir Uzma, which have not been receiving government ads for over a month. Ads in the Kashmiri newspapers, which often highlight alleged atrocities by security forces and are perceived as taking a pro-separatist line, dried up in the aftermath of the February 14 Pulwama terror attack.

While Greater Kashmir is the largest-circulated English daily in the Valley, Kashmir Uzma is the most widely read Urdu newspaper in the region.

Asked about the choice of colour in the newspaper ads, BJP spokesperson Altaf Thakur said there was nothing surprising and that no attempt had been made to exploit the people’s preference for green.

“Green is one of the colours of our party flag as well. We have used green only because it symbolises peace and development,” Thakur told The Telegraph “It is also a sign of victory.”

Asked why there was no trace of saffron in the ads, he said Kashmir already was a land of saffron and lotuses and the BJP wanted to “introduce green as well”.

Observers believe the BJP’s chances are bleak in Kashmir in the Lok Sabha elections, although the party won several seats in last year’s municipal and panchayat polls. That performance was seen as a result of the two main Valley parties — the National Conference and the People’s Democratic Party — boycotting the polls.

Thakur said the BJP was hopeful of a good result in south Kashmir’s Anantnag. He said the party would significantly increase its vote share in Kashmir.

National Conference leader Omar Abdullah hit out at the BJP. “The saffron of the BJP turns green when it reaches Kashmir. I’m not sure whether the party truly believes it can fool voters when it makes a fool of itself like this. Why can’t they show their true colours while campaigning in the Valley?” he tweeted.