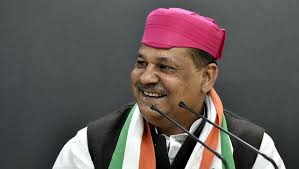 After RJD refused to cede the Darbhanga Lok Sabha seat in Bihar, the Congress on Monday fielded BJP turncoat Kirti Azad from Dhanbad parliamentary constituency in neighbouring Jharkhand. Azad, the son of former Bihar Chief Minister Bhagwat Jha Azad, , was a three-term Lok Sabha member from Darbhanga and had a public showdown with the BJP leadership in 2015 over the allegations of corruption in the Delhi & District Cricket Association.

Azad had joined the Congress last month and was expecting to be re-nomninated from Darbhanga, a seat considered to be his stronghold.

However, RJD put a spanner in Azad’s plans by refusing to concede the seat forcing ally Congress to look for alternatives. Congress had suggested that Azad contest from Valmikinagar Lok Sabha seat, an offer the crickter-turned-politician had turned down.

Azad had defeated RJD’s four-time MP M A A Fatmi in 2014 by a margin of 34,000 votes. RJD has fielded former Bihar minister Abdul Bari Siddiqui from Darbhanga.

In Dhanbad, Azad will face sitting BJP member Pashupati Nath Singh, who had defeated his nearest rival Ajay Kumar Dubey of the Congress by a margin of about three lakh votes in 2014.