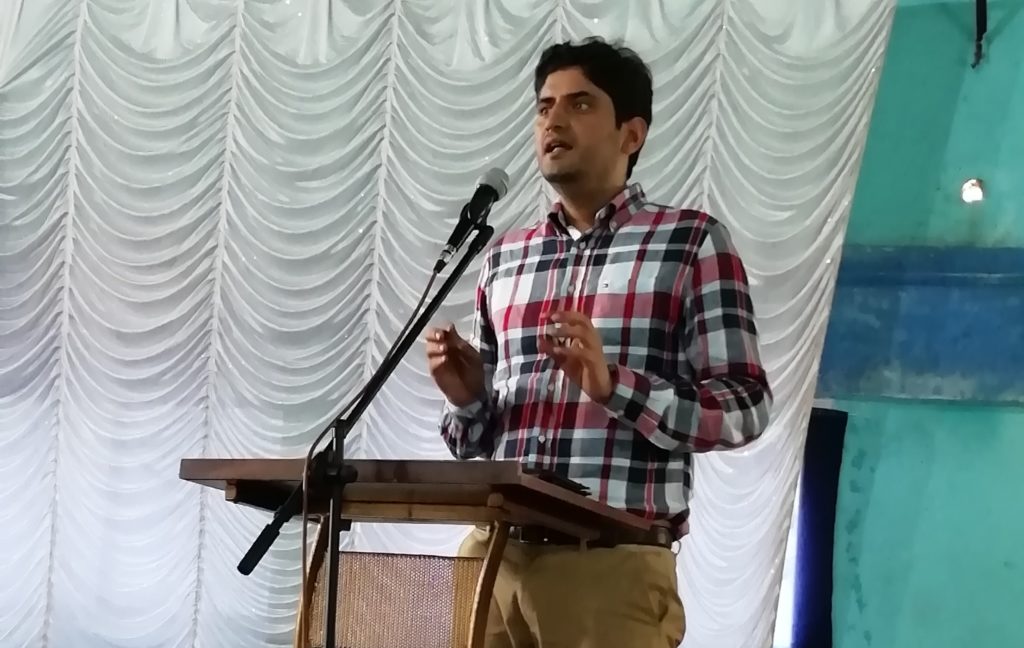 By Imran Inamar
Valpoi (Goa)
Things are difficult but nothing is impossible in this world , Students just need spark and courage to achieve their goal, said Shahnwaz Ur Rahman an IRS officer currently holding the post of Join Director of Income Tax Goa.
2007 batch officer Shahnwaz   put some light on inspiring life of Dr.Baba Saheb Ambedkar also and informed students that how Babasahab  struggled hard to take education and faced difficulties during student life.
He was speaking at the felicitation function of SSC meritorious students , oraganised by Socio Cultural Association ,Valpoi.
Shahnawaz further says, Timely changes are much needful for and each and every community to survive and meet the challenges of fast growing world. He said,Education is a must for every human being ,because this thing only separates us from animal kingdom and makes us civilized . Only education is the key which can change the scenario.
While Addressing parents he said that you should be supportive and should take care of your child right from the beginning ,  If a plant has strong roots, then only the fruit will be syrupy sweet, he added.
He explained the pattern of high status Civil service Exam before students and advised them to keep themselves away from negativity , it’s fair competition anybody can appear and crack to be an IAS ,IPS or IRS officer.
Around 150 eminent citizens ,teachers and students were present during the function. All the of the attendees appreciated the speech and way of explanation of IRS  shahnawaz . Some of them thanked President of the PSCA Abdullah Khan for inviting such great and inspiring personality in the valpoi town  and  further requested him to keep inviting such guests who are achievers or can guide parents and students.
Valpoi Muncipal council members Sarfaraz Sayed, Parveen Shaikh, Shehzeen Shaikh, president of Phoenix Scio cultural Association Abdullah Khan, students’ wing president
Majeda Aga , womens’ wing president sheneza Khan were present during the function.
Tags: Students need spark and courage to achieve –IRS shahnawaz Ur Rahman
Comments: 1