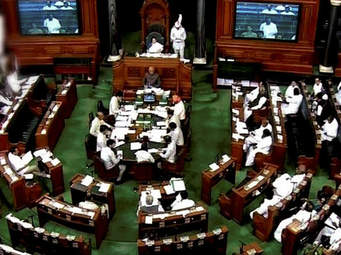 The 17th Lok Sabha elections came to an end in the month of Ramadan after a hue and cry of two months’ campaigning. The results were also declared in the same month, though it was much beyond the expectations of the political analysts. The new government was formed and the newly elected members of the lower house of the Parliament also took oath of their loyalty towards the country and the Constitution. The month of Ramadan ended too. Eid came with huge festivity and celebrations and went by. The entire Muslim community of India, along with the others, got busy with their normal life. But the things that were vividly felt during the last five years, campaigns, elections and post-election periods make contrary demand from them.

We have seen the hustle and bustle of elections since our childhood, seen the Netas shouting from the dice. But that time, such shouting and cry did not have any meaning to us. Our innocent minds only enjoyed by running behind the vehicles of the Netas and clapping with elders on false claims and promises in their bhashans. As we developed little sense and grew interest in the newspapers, our hearts began to draw the impact of delight and sorrow only on the basis of the numbers of Muslims elected in the Parliament or assemblies. But things have gone through drastic changes during the last five years. Situations of the country in the past government and recent election scenario compelled countless innocent minds to get out of the comfort zone and ponder over the present and future. The hearts felt pain. Thus, the person who cared for his own life and family alone began to ponder over the future phenomena of the country.

The most dangerous thing felt by every wise Indian during the election campaign was death of the ethics on political stage. They saw the autonomous bodies of the country sobbing under the pressure of power. We have seen the uneducated women of our villages blaming and exposing the ancestors of their neighbors while quarreling with them. But this time we watched the same episode from the stages of political campaigning. We were told by our elders that the Jawans fighting and dying on the frontiers are the brave soldiers of the country with no affiliation to any political outfit. But this time we also saw their pictures and names being used in the election campaigns. So far we were taught in the civics class that every Indian who is of the age of twenty five years is eligible to fight the Lok Sabha elections. But this time, we saw that certain person can be barred from contesting election in certain constituency. Since our childhood, we have heard that media is so powerful that even the strongest person can bow to it. But this notion too proved wrong. We saw the media bowing to the power. We have so far seen and heard that the person charged with terrorism lives in the misery of prison. But this time we saw one such person contesting the general elections on ticket of the biggest political party and became member of the Lok Sabha. Does all this not indicate to formation of a New Bharat?

So far we have heard that there are some secular parties which work with people, for people beyond religious line. But this time we saw that the commanding authority of such parties did not only proved themselves, though their gesture, to be adherent of certain ideology and faith, but also they well tried to keep the known Muslim faces away from the stage during the election campaigns. They were also ignored in distribution of the tickets. While making the grand alliance, the Mukhiyas of the so-called secular parties distanced themselves from the parties led by Muslims. Instead, they played a good trick to diminish one such party at all in the state of Assam. Does all this not indicate to the formation of a New Bharat?

The elections ended and all the elected members made merry on their victories. But we well observed that the Parliament – in which our Prime Minister had bowed to the Book of Constitution after making a historic win and said that they would bring the minorities closer to themselves – witnessed the sloganeering of Jai Shri Ram and Vande Mataram just to taunt on a member with skullcap and beard. Does all this not indicate to the formation of a New Bharat?

Another important thing which was observed during the election campaigns was enthusiasm of Muslim youths on social media. Not only the youths, but a considerable number of elders, Ulama and intellectuals had well observed the miserable state of Muslims during the last five years. Therefore, they made all efforts to push the communal forces to defeat. It was also heard very loud and clear that the Muslims should now come out of the treachery of the so-called secular parties and form their own political power. This view was substantiated by saying that even the Dalits have their own political front which raises their issues and works for their betterment. So, why should the Muslims not have? It was also heard that Muslims and Dalits need to join hands together, so that a nation with balance, equality and justice can be built. It was indeed a very good sign.

But now it seems that all our enthusiasm and commitment is washed away with the fatigue of fasting in Ramadan and celebration of Eid. We forgot all these things so quickly and got busy with our previous schedules. We must remember that relying on others to gain our rights in this world will be the highest level of foolishness. If we want to live in Bharat with honor and esteem, our youths must come forward to play a positive, serious and responsible role. Our elders must devote themselves to guide and train our youths. It is a fact that no social group of the country can live with honor without having a strong political front. But our first resolution, after the 17th Lok Sabha elections must be to strengthen ourselves in terms of faith, education and economy. This is the only way out for Muslims in India.

(Hifzur Rahman Qasmi is a New Delhi based researcher and author. He writes on national and international politics.)

The views and opinions expressed in this article are those of the authors and do not necessarily reflect the official policy or position of Millat Times.