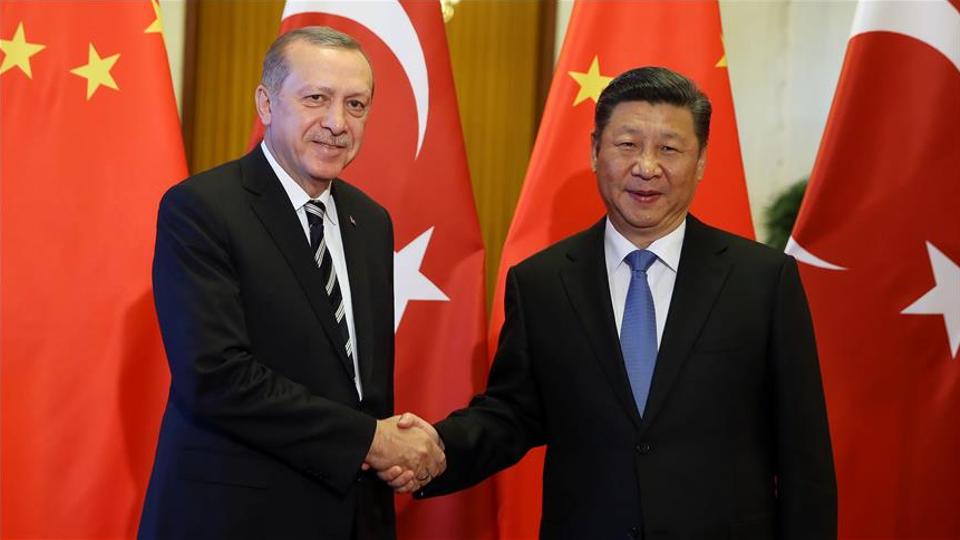 More than 1 million Muslim Uighurs in the Xinjiang region of China, their native land, are believed to have been interned in so-called reeducation camps by the Chinese authorities. The number may be as high as 2 or 3 million—out of a population of 11 million. Trapped along with them are Kazakhs, Kyrgyz, and Uzbeks, other Muslim minorities, though in smaller numbers. The Uighurs still on the outside are living in one of the world’s most pervasive and heavy-handed surveillance regimes, in which the camps are just one form of containment and punishment. Uighurs live in constant fear of arbitrary detention and can expect swift retribution for any expression of Turkic or Muslim identity—to the absurd extent that giving your child a traditional Muslim name is illegal.

Yet when Turkish President Recep Tayyip Erdogan, the self-styled defender of Muslims worldwide, visited China last week, state media reported that he said all the people in Xinjiang were “living happily” there, thanks to China’s general upward economic trajectory. Erdogan’s attitude is all too typical of the approach taken by the world’s most prominent Muslim leaders toward the Uighurs.

Erdogan’s buddy-buddy act with Chinese President Xi Jinping came despite a proclamation by the Turkish Foreign Ministry in February. “It is no longer a secret that more than one million Uighur Turks incurring arbitrary arrests are subjected to torture and political brainwashing in internment camps and prisons. Uighurs who are not detained in these camps are under heavy pressure,” the statement read. The ministry insisted that Turkey had raised the issue with Beijing.

Beijing reacted forcefully to the gesture, and Ankara folded without hesitation. Erdogan’s priority is now reviving historical links and “strengthening cooperation” between Turkey and China, as Turkey is bidding for a key role in Beijing’s Belt and Road Initiative.

Any road or rail channel between China and Turkey would have to go through Xinjiang, the westernmost part of China, so, in Ankara’s view, a shared faith, history, and kinship with the Turkic Uighurs should not get in the way of China’s handling of the local population. Ordinary Turks are strong supporters of Uighur rights, but Erdogan has a country to run—and he will not get sentimental about the issue. Muslim solidarity is a good campaign slogan and good international public relations, but that seems about as far as it goes for Turkey and others.

Pakistan, just across the border from Xinjiang, emerged as a country in 1947 specifically to be a place of refuge for Muslims. Since then, the country’s political, military, and religious leaders have taken it upon themselves to champion Islam and defend Muslims wherever they may be. Pakistan is, after all, the only Muslim nuclear state, so, by at least one measure, it has the most powerful military and the greatest capacity to intervene on behalf of oppressed Muslims anywhere.

Except, perhaps, if those Muslims live in China. Some go as far as describing Pakistan as a client state of China. Regardless, in an otherwise hugely fractured country and society, there is one thing everyone from military intelligence to radical preachers to politicians agree on: Chinese investment is vital for the country’s development and perhaps necessary even just to have enough economic activity to sustain the state and its massive army. That’s why there has been silence out of Islamabad—and why Prime Minister Imran Khan pretended not to even know about the issue when asked. Pakistani men married to Uighur women have seen their spouses disappear into the camps but received no aid from their government. China has been running a vehement propaganda campaign on the issue, spearheaded from its embassy—and spying on Uighurs in Pakistan itself.

Nor can Uighurs expect much sympathy from their other Turkic Muslim neighbors across the border in Kyrgyzstan, Kazakhstan, or any of the other Central Asian republics. They may share the religion of Islam, and even a common ethnic and cultural history, but all the governments in the region are looking to curry favor with Beijing as China is building its Belt and Road westward.

On the one hand, there are the hard geopolitical realities of having a landlocked country dependent on powerful neighbors for trade. On the other, there is the local governments’ predilection to lock up their own citizens. These countries hardly have the moral standing to censure China, even if they had the capacity to do so. Diplomatic pressure behind the scenes, coupled with public outcry in their home countries, has ensured the release of Uzbeks, Kazakhs, and others from the camps—but that sympathy doesn’t extend to Uighurs themselves.

What about the Muslim world’s most prominent spokespeople? Iran, Saudi Arabia, and Egypt are far away from China and not as dependent on its goodwill as its neighbors. They proclaim themselves leaders of the Muslim world and guardians of the global ummah, expected to come to the aid of oppressed Muslim people. They are certainly quick to rattle sabers, issue fatwas, and call jihads in other instances of slights against the faithful—most prominently regarding the Palestinians but also in Kashmir and Myanmar.

But they say nothing about the Uighurs. Despite having its security and trade guaranteed by the United States, and claiming global leadership on Muslim matters worldwide in its role as Custodian of the Two Holy Mosques, Saudi Arabia has absolutely nothing to say about the Uighurs.

To top it all off, even the (ironically named) Organisation of Islamic Cooperation is keeping silenton the Uighurs. Cooperation is all well and good, but as things stand, for all these countries and their leaders, cooperation which China is more valuable than cooperation along religious lines.

In the Middle East, even the countries that can rely on the United States for protection and trade look to China to include them in the Belt and Road trade network. The hard fact of the matter is that all the land-bound routes on the Belt and Road go through Xinjiang. So nobody wants there to be any instability in the region that might hinder trade—to say nothing of the downsides of upsetting Beijing on the issue.

Emerging Muslim-majority countries outside the Middle East—such as Malaysia and especially Indonesia, a country firmly on an upward economic trajectory and a country with the largest Muslim population, respectively, and both natural allies of the United States in their shared efforts to contain China in Southeast Asia—have perhaps the most latitude and incentive to speak out for the Uighurs. After all, the less trade traffic goes through Xinjiang, the more has to go through waters controlled by them. But even they have succumbed to Beijing’s checkbook. While the oppositions in both countries have sometimes spoken out on behalf of the Uighurs, that may well disappear should they get into government.

Yet the supreme irony is that Donald Trump’s administration has been the most robust in its censure of Beijing over its treatment of the Uighurs. Let that sink in. The administration of a man who called for the “total and complete shutdown of Muslims entering the United States” has shown more moral fiber and human solidarity with the Uighurs of Xinjiang than every single major leader of a Muslim country anywhere in the world.

The United States had a lot less to lose doing that, for sure—and the general turn against China may also have contributed. And when even an American administration that is instinctively hostile to Muslims has been moved to speak out for the Uighurs on humanitarian grounds, it exposes the hollow echo of the Muslim world’s incessant, empty mantras of Muslim solidarity.

Azeem Ibrahim is a research professor at the Strategic Studies Institute at the U.S. Army War College and a director at the Center for Global Policy in Washington.