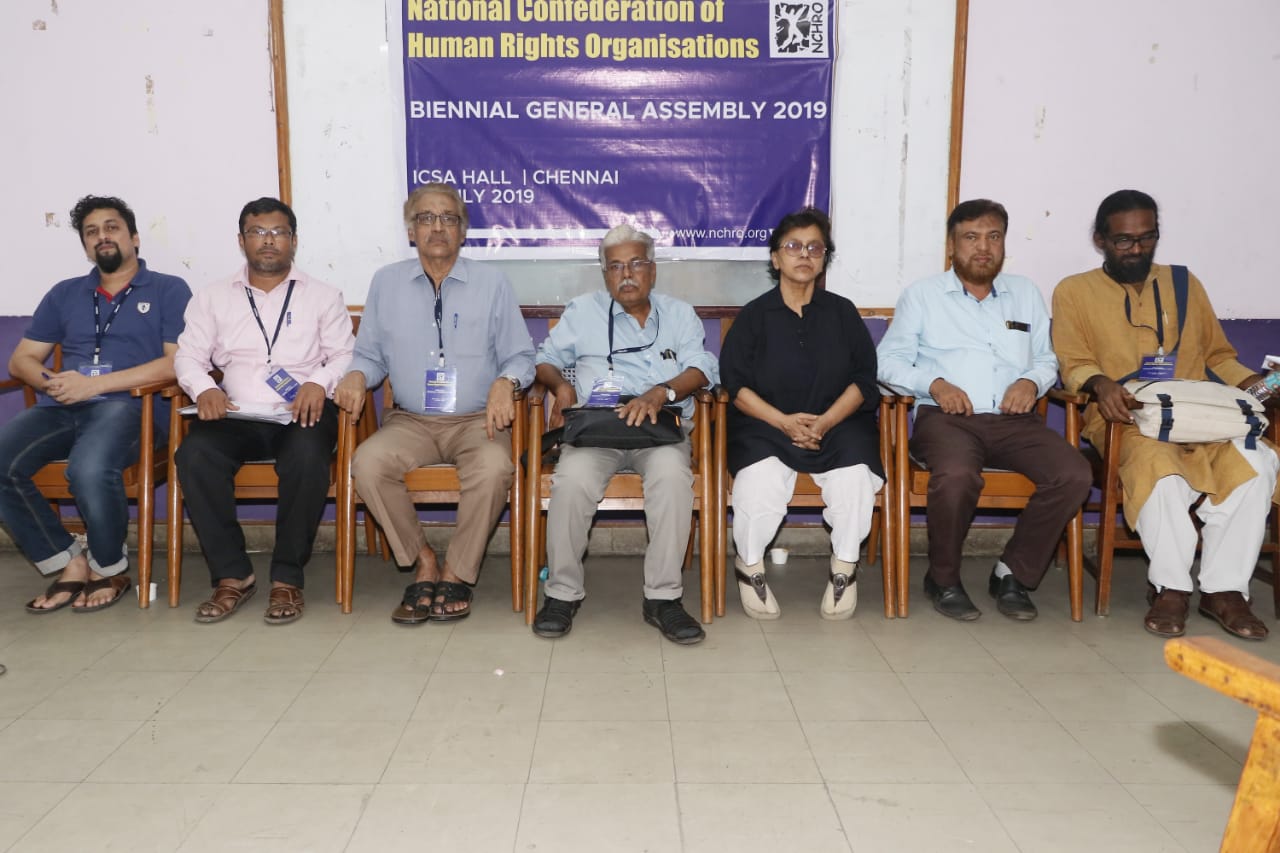 15 July 2019,Chennai*Press Release*
The National Confederation of Human Rights Organisations (NCHRO), held its Biennial General Assembly here on Sunday at ICSA Hall, Chennai. Prof. A. Marx was re-elected as the Chairperson for the term of 2019-2021.

This biennial event provided a platform for many prominent human rights activists, intellectuals and legal experts to brainstorm about the country’s human rights scenario. The Biennial General assembly is a place where important governance work happens, including the election of our National Executive Committee (Exco) and Office Bearers.

In his presentation, Secretary Reny Ayline added that promoting human rights is the core purpose of NCHRO, and in these turbulent times we need to strengthen our responses against the widespread abuses and prevent such situations from arising in the first place.

The two-year activity report of NCHRO presented before the Assembly. The general assembly critically evaluated the report to measure our effectiveness in promoting and defending human rights in our country and looked at ways we can improve.

The highlight of the meeting was the election of a new National Executive, who will run the affairs of the NCHRO for the next two years. The New Exco for 2019-21 that will be composed as follows:

Speaking about ‘Secular and Democratic Ways’, Exco Member Battini Srinivasa Rao added that having the idea of unity in diversity the nation has always prided itself and India is a country where secularism and religious pluralism are at the heart of the Constitution. Democracy is under attack, and we all have an obligation to do, what we can, to save it.

Adv. S. Balan, NCHRO Karnataka Chapter President, explained the modus operandi of right wing culprits in the killing of many innocent activists including Gauri Lankesh. “Only, when our system committed themselves to prosecute and punish the perpetrators of these atrocities it will be possible to say that we have reached a complete and permanent end to impunity. No doubt, this is one of the biggest challenges to the rule of law facing in our country”, he said.

Nagari Babaiah the veteran human rights activist added that, we have to continually fight for truth, liberty, equality and the things we stand up for.

Delegates, thinking through different voices underscored that we stand together in order to not only protect our rights today, but the rights of those who will live tomorrow.

Upon his re-election, the Chairperson Prof. A. Marx thanked the Assembly for its support and highlighted the value of the human rights work, we carrying out.

The Secretary, Adv. A. Mohamed Yusuff concluded the General Assembly by wishing the new Executive Committee all success, thanking the delegates for having come and hoping that they will be able to carry on the message and knowledge shared further to help defend the inalienable human rights of all people.

The following resolutions were adopted in the General Assembly.

1. A bill which seeks to allow an individual suspected to have terror links to be designated as a ‘terrorist’ was introduced in Lok Sabha on the first week of July, 2019. In the name of “zero tolerance” towards terrorism without any pre-legislative consultation the bill was brought before the parliament. The amendment to Schedule 4 of the UAPA, the bill now allows the NIA to designate an individual suspected to have terror links as a “terrorist”. As of now, only organisations are designated as ‘terrorist organisations’. Now this amendment makes way to the NIA to designate anybody as a terrorist without any proper evidence. There are enough provisions in the present laws to go after individuals. This is a clear indication that the present BJP government after the election victory is determined to implement an undeclared emergency in the country. NCHRO strongly condemns this effort of the government and urges it to withdraw the bill immediately.

2. Last year the Supreme Court of India issued new directions to the Union and State governments to protect India’s ‘pluralist social fabric’ from mob violence such as “lynching” in the name of protecting cows. The SC didn’t hesitate to describe such acts as ‘horrific acts of mobocracy’. The Union and most of the State governments have done little to comply with the directions of India’s highest court except Manipur It passed a remarkable law against such mob lynching incidents. After the formation of the new BJP government in the Centre once again such mob killings are increased all over India. Even in Tamilnadu, which has no such history of violence against caste and religious minorities a young man was beaten and attacked by a mob in Poravacheri village of Nagapattinam district, few days back for posting in his facebook page about his experience with a beef soup. In this background we demand and urge the Parliament to pass a law immediately to combat such mob hate crimes.

3. The ‘Lawyers Collective’ is a voluntary group known for raising human rights issues in the courts of India. On the basis of a complaint by the Home Ministry that foreign aid received by this group was used in violation of norms, CBI has raided senior lawyers Indira Jaising and Anand Grover’s home and offices three days back. The CBI had filed an FIR on 13th of June against Grover who is the president of Lawyers Collective. Indira is also a founder member of the Collective. NCHRO strongly believes that Grover and Indira are targeted for the human rights activities they had done over years. We demand that such actions against these eminent Lawyers to be withdrawn immediately.

4. The hearing process for the 3.62 million people who have submitted claim applications to be included in Assam’s final National Register of Citizens (NRC) is now going on. The applicants are facing many problems around this ongoing correction process. Most of those who were unable to fill the gap between the online and offline processes and most of those affected in this way are the less educated or uneducated. They are the real victims now. The People are simply unaware of what could happen to them if their applications are rejected and their names are not included in the NRC. We all know that in today’s world Citizenship is a great privilege. As columnist has written in an eminent newspaper if every one of the 130 crore Indians are asked to prove their citizenship with stringent conditions about 90 percent of us are not able to prove our citizenship. There is no answer to the question about what we are going to do with those who are not able to prove their citizenship in this way. We demand immediate withdrawal of this process and confer citizenship for all of them.

5. The Union Cabinet has now cleared a DNA profiling Bill, which seeks to control the use of DNA technology for establishing the identity of a person. The Bill was passed in the Lok Sabha in January but lapsed as it could not be cleared in the Rajya Sabha due to lack of support from the opposition. Now, it is said that after the Cabinet’s nod, a fresh bill will be brought in Parliament in the next few days. The legislation seeks to establish a National DNA Data Bank and Regional DNA Data Banks. The Bill also envisages that every data bank will maintain indices like the crime scene index, suspects’ or under trials’ index, offenders’ index, missing persons’ index and the unknown deceased persons’ index. The legislation also seeks to establish a DNA Regulatory Board. Every laboratory that analyses DNA samples to establish the identity of an individual, has to be accredited by the board. Under the Bill, written consent by individuals is required to collect DNA samples from them; but, the consent is not required for offences with the punishment of more than seven years of imprisonment or death. NCHRO condemns such measures since it would be one of the most intrusive enactments of its kind.

6. R.S. Mugilan, who is also the Coordinator of Tamil Nadu Environment Protection Movement, was travelling from the Egmore railway station in Chennai to Madurai in a special train on the night of February 15, after he held a press meet in Chennai about the shooting of 13 civilians during the anti-sterlite protests. In the press meet, Mugilan named two senior police officers and accused them of being complicit when miscreants torched government vehicles and destroyed CCTV cameras. The Tamilnadu CB-CID has now arrested the well known environmental activist Mugilan in connection with a rape case registered against him in Karur district. The activist, who went missing nearly five months ago, was handed over by the Tirupati police to the Tamil Nadu CB-CID two weeks back. He says that he was abducted by some people and kept somewhere in Andhra Pradesh for the past six months. NCHRO demands that he should be released on bail to get proper medical treatment. It should be investigated whether his allegations are true and the culprits who are responsible for his abduction are to be arrested immediately.

Some other resolutions including the demand for the release of political prisoners, repeal of sedition law, condemning the tag of anti-national to suppress the voices of dissent were also passed.