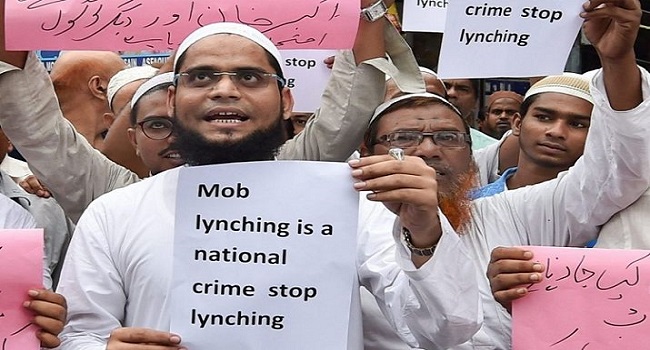 Alongside the mob lynching of Muslims, we are witness to growing attacks on dalits. Muslims and dalits are the new combined ‘other’ under the current political regime. While attacks on Muslims consolidates the Hindus, simultaneous attacks on dalits defines who that Hindu is.

A number of incidents of mob lynching that have targeted Muslims are directed against Pasmanda Muslims. These are attempts to further segregate Muslims and foster divisions within the community. It needs to be understood why and how brahminism is the guiding force behind such attacks and how it generates a silent majoritarian consent that quashes the possibility of large- scale protests against them.

This silent consent is possible because violence against Muslims and dalits is failing to produce a sense of shame or guilt among the higher echelons of society. Instead, the reverse—the idea of a dispensable “surplus population”—is crafting the narrative of violence.

Shame is a powerful sentiment, for it produces a shared idea of what is right or wrong. The notion of shame cuts across caste and other social identities. Shame, in a substantive sense, foregrounds the fact that what is wrong for me is also wrong for you. In someone who does not adhere to this universal dynamic, invariably, a sense of guilt and shame is produced. This is because dignity and recognition are the opposite of shame. They are also based on a sense of mutuality and reciprocity.

Brahminism, as a world view and lived philosophy, undermines and suppresses the innate ideas of mutuality and reciprocity. It generates a segmented and segregated sense of self and fosters a self-referential idea of who we are based on purity-versus-pollution kind of distinctions.

In brahminism, social dynamics are established where the ‘other’ is made irrelevant to one’s own identity. In other words, for a brahmin, what he does not know or own is either irrelevant or simply does not exist. The nature of brahminism is, therefore, inherently non-dialogic. Ritualism replaces reciprocity in its posture.

The immense challenge before all anti-caste movements is to seek recognition from the very same dominant caste that obliterates its presence. This was partly true of race as well, which creates a ‘double consciousness’ of imitating the master, yet striving for a distinct identity. Brahminism seems to take this further, by creating an absolute segregation through the practice of untouchability. Through it, spatial and bodily segregation are used as the technologies to dominate and deny the self of those it ‘others’.

This is why, in social dynamics structured through the prism of brahminism, it is difficult to instill a sense of shame and guilt. Even the most dastardly violence does not evoke sympathy and compassion of the collective. The images of bleeding Muslim men and helpless dalits do not create a sense of guilt among the so-called upper castes because guilt and shame are outsourced and externalised by brahminism. One does not take responsibility for the actions of lynch mobs. Instead, lynching as a phenomenon does not seem to directly touch those who do not belong to the vulnerable social groups.

Gandhi had countered this tendency through his appeals to conscience. Politicising the conscience was necessary in order to create a replacement to the missing sense of reciprocity and mutuality in everyday interactions.

Brahminism is also uniquely opaque and porous, since it has ascribed to itself a ‘natural’ superiority that extends beyond the social dynamic. It can lay claim to anything because, in essence, nothing is beyond the universe that it has created. Brahminism co-opts without inclusion and excludes without contradiction. That is how it could co-opt even those political and social forces that had challenged its very foundations, from Buddhism to Ambedkar. Historically, Brahminism has projected even these forces as an extension of itself, in order to lay claim to them.

Brahminism does not suffer from the anxiety of diluting its essence when it co-opts these diverse contradictory impulses. Hence, while Ambedkar was unequivocal when he stated that he would not die a Hindu, today we are witness to attempts to make Ambedkar a part of the pantheon of Hindu nationalism.

Lynching a Muslim or physically assaulting a dalit is filtered by a complex web of brahminical practice and philosophy. For example, it thrives on driving a wedge between thinking and being. That is, thought and intention could remain ‘pure’ even if actions do not necessarily match them. In fact, the purity of the thought can be maintained only when it is separated from action. As thoughts do not reflect actions, actions need not reflect intentions at all. Then the act of lynching does not necessarily reflect the intent to cause harm and violence; it could be more of an exigency of the situation. This is how purity of thought can remain undisturbed by the sheer physicality of visceral processes. One can act without really holding the conviction that it is the right thing to do.

As this complex organisation of brahminical doctrines continues to structure popular consciousness in India, the contrary depiction—that India is becoming intolerant or depraved as a result of the growing numbers of public acts of violence—is not self-evident to society. That is why it is difficult to ascertain whether the silence over mob lynching reflects consent or indifference, and whether indifference necessarily implies consent. This suspended state of collective consciousness poses the real challenge for a politics that wishes to challenge mob lynchings.

How will this politics evoke public conscience and compassion for Muslims and dalits? How will it evoke a sense of shame and collective guilt? How will it cultivate a narrative that such violence does not harm just the victims but also debases onlookers like us?

The continuing hegemony of brahminical thought processes lies at the root of this issue. The need to pick up the threads of the unfinished task of the anti-brahmin movements of the past looms. The challenges and limitations these movements faced also need to be examined so as to inaugurate a new kind of anti-caste politics. This politics needs to be simultaneously sensitive to gender, religious minorities, backward classes and India’s multitudes of perpetually-marginalised groups.