Home National ‘Sonbhadra(U.P.) Shootout Was a Massacre’: 10 Are Killed in Caste-Driven Land Dispute 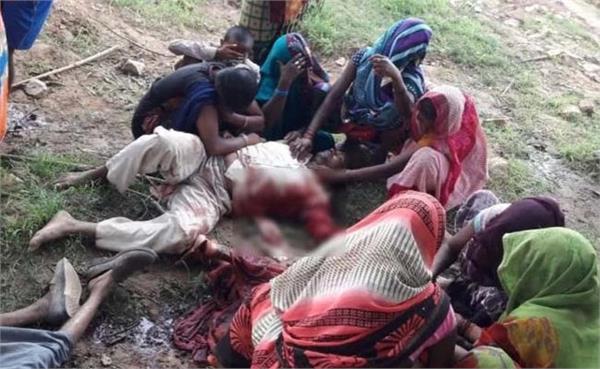 A village chief and a gang of higher-caste men opened fire on poor farmers in northern India and killed at least 10 of them in a land dispute, police officials said on Thursday. Experts said it was one of the deadliest such episodes in India in years.

“It was a massacre,” Roma Malik, an activist who has worked on tribal rights in the area for years, said of the bloodshed, which unfolded on Wednesday in a village in Sonbhadra District, about 500 miles southeast of New Delhi, in Uttar Pradesh, India’s most populous state.

Communal tensions regularly flare as tribal members try to reclaim land. Activists say that Sonbhadra District, which is industrial, forested and ripe for mining, has been a tinderbox for years.

Officials said that on Wednesday, men from the Gujjar caste — a midrank caste, and the dominant one in that area — were bent on taking possession of about 100 acres that tribal farmers were using to grow rice.

The Gujjar men showed up with tractors and guns, and were met with protests from the farmers, who belong to the historically marginalized Gond tribe. The farmers, who had been surviving off the land for decades, tried to drive off the Gujjars by throwing rocks. This went on for about a half-hour, and the Gujjar leader and his accomplices then opened fire, the police said.

“Hand-to-hand battle also took place, and many people were injured,” said Ankit Kumar Agarwal, the district magistrate in the area.

Significant violence is still meted out — and the culprits are often not prosecuted — against the lowest castes and tribal people.

“Tribals are one of the most landless communities in India,” said Kumar Sambhav Shrivastava, a journalist and co-founder of Land Conflict Watch, a data project that analyzes these disputes. “Traditionally, it was easy to take over their land, kick them out.”

The authorities said that all of the people killed on Wednesday — seven men and three women — were Gond members, and that some Gujjar men had also been injured in the fighting. The police said the combatants also used wooden sticks, cleavers, spades and iron rods.

Police officials said that they had arrested 24 people in connection with the violence, but that the village chief was still at large.

Gujjars are hardly at the top of the overall caste ladder, and are far below the Brahmins, who are considered the highest. In some places, Gujjars complain that they themselves are discriminated against because of their caste. But in Sonbhadra District, they own much of the land.

Competition for land in India is sometimes so fierce that living men have been formally declared dead by competing relatives eager to inherit their plots. They bank on a byzantine court system taking years to correct the error.

Vijay Singh Gond, a former state lawmaker in Sonbhadra District, said the situation was so desperate in his area that “land sharks” were circumventing laws that restrict the amount of land one person can hold by putting their pets’ names on titles.

The authorities said that in this case the village head and some of his relatives had bought the land from a private seller a few years ago and the Gond people had refused to give it up. Several police complaints were filed in the time since, implying other standoffs. But the authorities said there had never been a clash even close to what erupted on Wednesday.

Mr. Gond, pointing to powerful “land sharks” who routinely pay off local officials to manipulate land records, raised doubts over the legality of the land purchase.

“On this particular piece of land, hundreds of tribals were earning their livelihood for several generations,” Mr. Gond said. “But the land mafias manipulated the land records and got it registered in their own names.”

For generations, India’s 100 or so million tribals have populated the country’s dense forests. But colonial-era laws eroded their claims to the land, and tribal people were considered encroachers. The forests have also been shrinking as India’s population grows and wild land is cleared for dams, mines and farms.

In 2006, the government tried to aid tribal groups by enacting the Forest Rights Act, a law that allowed traditional forest dwellers to remain on their land. But as India has developed, enforcement has been difficult.

Mining and infrastructure projects continually threaten these populations, including members of the Gond tribe, who live in some of India’s poorest and most conflict-prone areas — a factor that has contributed to their landlessness.

Ms. Malik, who works for the All India Union of Forest Working People in New Delhi, said that several tribal people were killed in nasty land disputes in the early 2000s.

And in recent years, she said, higher-caste landowners have felt more emboldened to assert themselves over tribal groups, because they feel protected by the muscular Hindu nationalism of India’s governing Bharatiya Janata Party.

“These people have high connections in the government,” Ms. Malik said. “Justice is very far away. The Constitution does not apply in this area.”