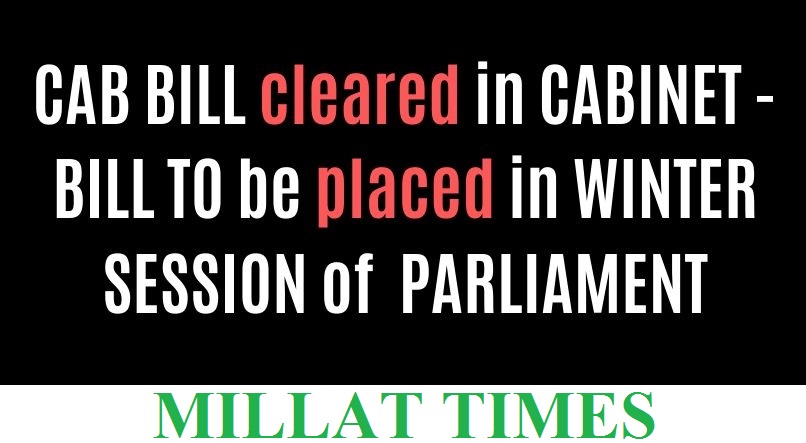 The Citizenship Amendment Bill (CAB) has been passed by the Union Cabinet and will likely be placed next week in ‘WINTER SESSION’ of ‘PARLIAMENT’.

The CAB seeks to provide Indian Nationality to six communities – Hindus, Christians, Sikhs, Parsis, Jains and Buddhists who are fleeing religious persecution from our neighboring countries and seeking asylum in India.

“Minorities in the neighbouring theocratic countries have been subjected to continuous persecution, which forced them to seek asylum in India. Giving citizenship to six minorities is in the spirit of Sarva Dharma Sambhav,” Mr Singh said.

However, it completely ignores the Muslims and other minorities from countries like Sri Lanka and Nepal who might be trying to seek refuge in India.

This horrible discriminatory bill seeks to divide the refugees on the basis of their religion instead of their plight.

The opposition alleges that the bill targets Muslims and is at odds with the secular principles enshrined in the constitution as it excludes a community. According to critics, the move is a violation of Article 14 which guarantees the right to equality.

Our Constitution talks about “Secularism” and trying to push a religious agenda in a country like India would have devastating effects on the very social fabric on this country. This Bill goes against the very tenets which form the preamble of our Constitution as it stands now.

If refugees are going to be given asylum and citizenship in this country (and there is no harm in doing that at all) such a decision should not be based on religion of the refugees but on the merits their cases in its individual capacities.

It is important that anyone who cares even a little bit about the “secular” nature of India and respects the “Constitution of India” stands firmly and vocally against such a discriminatory bill.

It is also important that every well-meaning Parliamentarian, who does not stand for communally divisive politics casts his vote against such a bill.

I also hope that the legal experts will be able to challenge this bill in the court of law on grounds that this is anti-constitutional and gives a stiff challenge to the passage of this bill.

Finding new ways and means to target just one particular religious community is JUST NOT DONE !!!

Disclaimer: When you stand by and let injustice happen, without raising your voice against it, you are not being apolitical, you are in fact supporting tyranny.