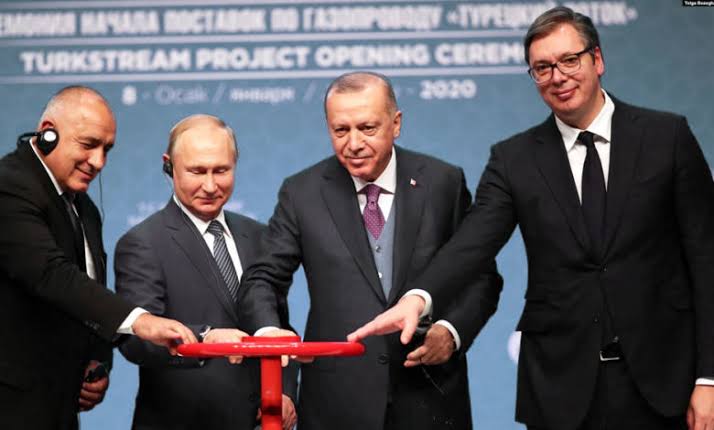 Today, President Putin and Erdogan has launched the TurkStream gas pipeline from Russia to Turkey. Its length is 910 km and running under Black Sea. It will transfer 31.5 billion cubic meters of gas per year and meet the energy demand of 15 million homes to Ankara and Istanbul.

The second pipeline of TurkStream will supply gas to Europe. The second line is expected to go from Turkey through Bulgaria, then to Serbia, Hungary and Slovakia. Western and Central Europe have long been Russia’s major consumer of gas. Moscow started supplying natural gas to Europe in the 1950s.

Putin said pipeline will make Turkey a “European Energy Hub.” He said it will not only be good for Turkey’s economy but the whole region. Erdogan said Russia and Turkey aiming for $100 billion trade volume in future.

Erdogan said Russia and Turkey will complete future projects together with advanced technologies. He stressed that “no chance for projects in East Mediterranean Sea” (Libya, Cyprus, Israel, Egypt or Greece). Let us turn Mediterranean into a field of cooperation and peace.

Erdogan said US-Iran tensions has reached a point which we don’t desire. Turkey does not want proxy war by any country in this region. Iraq is in danger of completely losing its stability. We will not allow bloodshed and tears in our region. I will not let Iraq turn “into pit of fire”. We will overcome difficult periods with support from our distinguished friend President Putin of Russia.

Further he emphasizes the significance of gas pipeline, tweeted “Turkey has never sought regional tension. Turkey’s vision for cooperation is embodied by TANAP, which carries Azerbaijani natural gas to Europe, and TurkStream, which transports Russian natural gas to Europe and we are proud to inaugurate today”