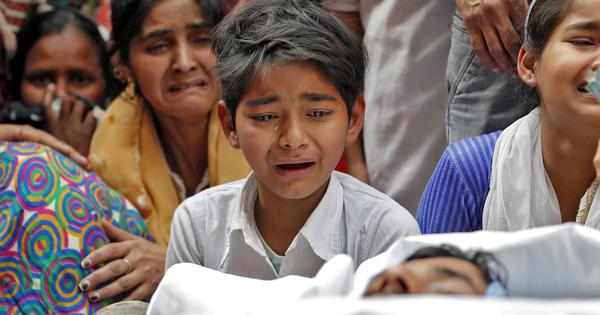 The colonial usage of ‘riots’ denoted two religious groups indulging in bloody violence. The British, who thought themselves as morally superior to every other group in India, sought to distance themselves from these warring factions in trying to impose order. The British have long gone, but the usage of this colonial word continues and is employed to understand various occurrences of post-colonial violence in India. This colonial category of riot has been employed once again in the recent Delhi violence which saw destruction of life and property which the city had not witnessed since the brutal anti-Sikh violence of 1984.

The Delhi violence is certainly not a riot: more and more it is looking like an anti-Muslim pogrom. Pogroms are not about two groups of people fighting each other. They are fundamentally waged against the powerless minority often with the involvement of the state machinery. What we saw in Delhi was a systematic brutalization of Muslim life, their businesses attacked and destroyed; the police acting as bystanders or actively complicit with the organised Hindu mob; and complete apathy of the ruling political establishment to the woes of suffering Muslims. This is not a riot, certainly not a clash. This is an orchestrated, systematic campaign against to teach Muslims a lesson. The Hindu majority has long been gripped with imaginary fears of the Muslim other and it doesn’t take long for this fear to vent itself on the streets given the right political signals.

Certainly, Hindus have also been killed in this violence. But the disproportionate violence inflicted on Muslims is for all to see. Not just in terms of human life, but wherever possible, Muslim businesses have been targeted deliberately which can only lead to one conclusion: that this violence must have been planned for some time now. Those who think this was a spontaneous burst of ‘mob-violence’ are certainly participating in normalising anti-Muslim hatred. Those Hindu liberals who are arguing that violence happened from both sides are necessarily drawing a conscious false equivalence and are equally guilty of not calling the evil by its name.

Also guilty are those media houses who have indulged in full time anti-Muslim bigotry and have actually succeeded in making anti-Muslim prejudice as common sense for a large sections of Hindus. When Muslims were being called termites from the highest levels of political establishment, these media houses were laying the ground for extermination of such termites. Through the last many years, this normalizing of hate towards Muslims was bound to have an effect and this is what we saw in Delhi. We have called out the political establishment for indulging in hate speech. It is time to understand that various media houses, in the name of doing journalism, have immersed themselves full time in peddling and normalising hate speech against Muslims. Those who defend them in the name of media freedom fundamentally misrecognise their character and are therefore indirectly complicit in this anti-Muslim hatred.

After any such anti-Muslim pogrom, it is Muslims themselves who are called upon to show magnanimity and accept peace in the name of communal harmony. We are already seeing such moves afoot wherein Muslims who have suffered the most are being asked to forgive the marauders and forget whatever happened to their kith and kin. This has been attempted before but whether it has ever worked is an open question. What is more certain is that such a careful and manufactured art of forced forgetting has only emboldened the perpetrators of violence. Long back, a prominent social scientist had asked the question: can there be any reconciliation without justice? To all those currently engaged in fostering inter-faith harmony after the Delhi pogrom, this decades old question needs to be asked with renewed urgency.

Muslims today are in an unprecedented situation. They are standing alone, bruised and battered, without any social or political allies. If it is true that Dalits constituted the majority within the Hindu mob who killed Muslims and pillaged their neighbourhoods, then it is a worrying sign indeed. A handful of liberals within Hindu society is certainly not enough for a besieged community to bank upon. Parties who depend on their votes have stopped speaking for them. Partly out strategic thinking and partly because they themselves have shifted to the right, any empathy for Muslims threatens them with the erosion of their core social base. This pitiless situation is so grave that the ruling party of Delhi does not think twice before sacking its own Muslim councillor on an allegation essentially levelled by the Hindu right. His only crime was that he did not rely on the police and tried his own means to save his life and property.

We should also understand that this anti-Muslim pogrom must have had the sanction of the highest levels. After all, it coincided with the visit of the president of the most powerful country. Those who are baffled by it and think it was a miscalculation neither get the game nor the messaging. The very fact that India could do it this to Muslims and manage the silence of Donald Trump, only tells us that in the eventuality of an NRC, when more such pogroms may be required, the government can rest assured that the world would not interfere with its ideological design. And that’s why this Delhi anti-Muslim pogrom may be a precursor to something more sinister in the making.”