Home Opinion Opinion | A New Bonhomie In The East: A Warming Trend In... 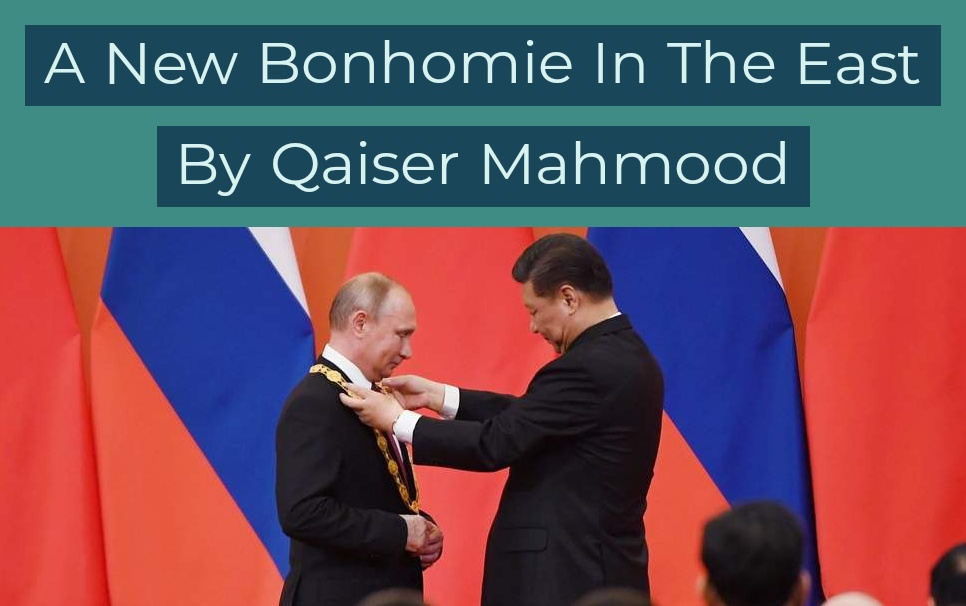 Power transition is a perpetual Phenomenon. Many great empires ebbed & Flowed with the passage of time. In the 18th & 19th century’s a country land forces were a great impression of its Power .During the inter-awar period the Naval capabilities were the most important figure of Power expression. During the cold war period the Power was measured the one have maximum nuclear Weapons. After the end of Cold war Power concept dramatically changed & focus mainly on GDP. From 18th to 19th century’s all of Major Powers take their part to dominate rest of the others as per their Area of influence & military capabilities.

In 1904 Halford Makinder became famous for their extraordinary proposition. He argued that whoever commanded the Eurasin heart will command the worldisland .to him the world island consisted of Asia, Europe & Africa, Whoever dominant this would dominant the world. At that time large part of the heartland was dominated by the Russian empire. Power struggle among different European Powers, in the era of Multi polarity was nticed as lust for Raw materials & influence .

After WW1 & WW2 finally a new stage of Power Politics takes its shape. Europe became a centre Piece of unity, integration & Mutual harmony.They shunned their mutual discord decades long rivalries & set together under prescribed Economic & military platforms . (EU European union -NATO North Atlantic treaty organisation ).
Sphere of influence between US & USSR began after the end of WW2. UK was no more a global Power ,France, Germany, Japan were massively bombed, their infrastructures & Economy were deteriorated .There were only Two remaining players on global stage US & USSR who’s fought decades long cold war. After the collapse of USSR ,US became a lone super Power with new liberal world order. US maximise their economic & military might with full swing .
Mighty US on the one side & rising China the Resurgence of Russia on the other hand. In the start of twenty first century new miracles happened to the new global world order. The tragedy of 9/11,Russia swift response as global actor , Rising China with massive economic outlooks , New economic alliances, regional connectives, 2008,9 economic crises & US huge financial losses against Global war Against terror GWAT etc.
After the end of cold War NATO military alliance were no more justifiable reason for the West to build up hard Power against Wounded Bear the communist Russia the only looming threat to the west.. European countries neglected military might and usually focused on soft Power. They are labelled as “free rider” in US military strategist Eye’s. European countries which enjoys liberal Democratic system ‘according to Kant Democratic countries avoids wars. Where there is democracy there will not be war.the Kantian theology were supported by even US that Democratic countries don’t plunge into the war. 2008 economic crises further intensified downward Decline in European countries military expenditures it was shocking & frustrative development for US as staunch military ally of the European partners.

China & Russia strategic relations passes to many Ups & Downs. Before disintegration of USSR Both countries experienced bitter phases of diplomatic ventures. Containment of USSR & China US Ping-Pong diplomacy under Nixon presidency Both countries relation’s went to the Edge of confrontation. Thing’s utterly changed when US triggered her foreign policy against China oriented as potential threat to US hegemonic desires .

The tragic event of 9/11 shifts US Containment policy Against China for sometime. Russian & China Felt same animosity Against the Same Enemy ‘US. Russia Geostrategic interest were challenged by US in Eastern Europe, Middle East & CARs Republics. Missile deployments in Poland & Eastern Europe. Russia punitive Police against her Former Territories was anticipated as source of confrontation with US.
China facing counter Measures from US in SCS region. US alliance with regional countries Against China fueling the growing mistrust between Two Powers. China & Russia tightened in strong economic & Political alliance SCO. Both countries has similar Political & Social system. State controlled Capitalist system under strict Visionary Leadership further strengthening both countries diplomatic relations.

China Russia economic relations spiraling up with Each passing Year. Both countries trade volume is more than $100 billion. Which will be increased to $200 billions till the end of 2020. China will be the largest consumer of oil & gas after 2030. China needs oil & gas supply from Russia. Both countries recently launched a billion dollars gas pipeline project which passing through Siberian region to China .this hundred billion dollars gas pipeline is the great milestone between Two countries growing strategic & economic partnership. Both Countries encouraging their mutual support to Russia led Eurasian economy union & China lef BRI Economic project. Both neighbouring partners want to go with win win diplomacy in very walk of domains. Russia is also Part of China led BRICS economic ,Political alliance. BRICS is the new merging economic alliance which posses huge capacity of influence. These are the potential Economic Powers which will change the future economic discourse of the world.

The irresistible Geo-Political Power shift from West to the East is an invincible fact of twenty first century .The idea that geo-political centre of gravity will shift from the transatlantic world to Asia is by no means new .it is a fact that China is growing,reshaping the world Politics, Russia is acting as global Power along.

Covid 19 further intensified the growing Gap between West & East in Power structure. Asia will be the next Power hub of Word Politics not only in military ,economic, but in scientific field innovations & research. Twenty first century is the century of Asia an old Asia which always put glaring Prints on international Power politics.