Home Opinion Opinion | COVID-19: We Are At The Crossroads Of Human Civilization 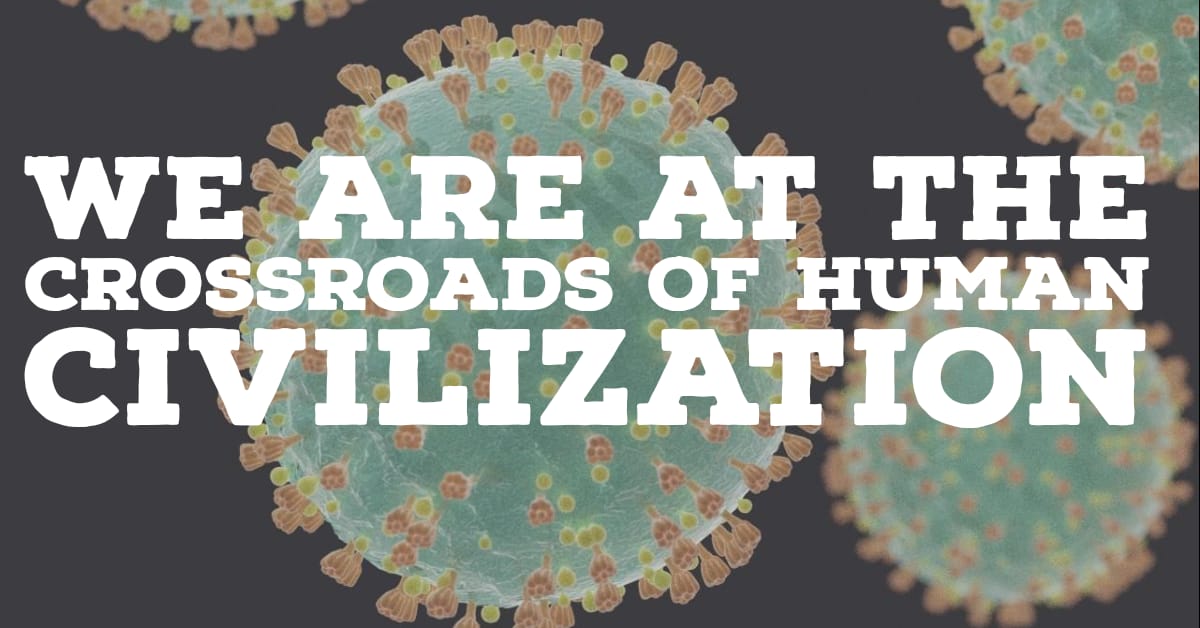 We are at the crossroads of our civilization. The COVID-19 virus is speeding up the destruction of the system as we know it in the Western World and is ready to create a whole new society, where the oppressed will become the free and the oppressors will fall. We now have the choice to eliminate what we call neoliberalism or capitalism and replace it with a more just system, as based on the principles of Lyndon LaRouche, who foresaw the downfall of mankind and predicted that we need a “new way of life“.

The pandemic has already opened many people’s eyes or will do so in the near future. History teaches that after a pandemic or disaster, famine, wars, and upheaval will follow. Lyndon Larouche is a famous politician and activist, but one who Wikipedia describes as a fraudster and cult leader that was convicted by the “establishment – deep state – cabal“, or as he and his movement calls it, The British Empire, because he became too dangerous for the establishment since he only wanted a fair and just society where the rich would lose their money and power.

The “heat“ is on, and many notable figures, former ministers, presidents of banks, American farmers, Japanese ex-finance ministers, African leaders, ex-ministers of Italy and France, and renonwned scientists from all over the globe are joining this movement as they all come to the conclusion that the system we are living in, in the Western World or remains of the British Empire, has already collapsed since 2008 during the so-called financial crisis.

The principles of the British Empire were based on an inhumane, war- and financial-based empire, which destroyed many parts of Africa and Asia where people were sold as slaves. The DutchEast India Company also plundered the fast richness of Indonesia and many parts of Asia, colonized Suriname, and up until today, the Caribbean islands of Aruba, Bonaire and Curacao. They are still part of the British Empire up to today. Whoever thinks the British Empire disappeared is wrong. It still exists, but in a modern style. They are still plundering Africa. Asia has woken up and countries like China and Russia developed into new world-powers, to the great anger of the top of the Empire. But Africa is rising up — as a phoenix rises from the ashes of slavery and poverty — thanks to the help of China and Russia.

The British Empire (BE) comprised the dominions, colonies, protectorates, mandates, and other territories ruled or administered by the United Kingdomand its predecessor states. It was the largest Empire in history for over a century. By 1913, the British Empire counted 412 million people, 23% of the world population. It was and still is the foremost global power. After the Second World War as Wikipedia wants us to believe, the Empire declined. It didn‘t, it just changed its shape. Other methods are used nowadays to colonize entire populations, like Palestine and Africa, which are still being robbed of human dignity and live in extreme poverty. They also have no access to health care, food, and water. In Africa, 55% are without electricity and 41% are living in extreme poverty. This is why the European mainland of the British Empire (the EU is part of this Empire) is the target for migration from Africa, and that also explains the lack of will to improve their former colonies during the last century after World War II. Part of the so-called British Empire are the Rockefellers, Rothshilds, the EU, NATO, Soros, NGOs like Amnesty, Human Rights Watch, Bellingcat, and the Atlantic Council. The BE has also partly moved to the USA. The IMF, the largest BE Institution which lends money with high interes on their colonies in Africa and even to their own impoverished EU countries like Greece, Spain and Italy, is a part of it as well. In addition, Wall Street and the City of London are part of the BE too, and the Queen of England is their undemocratically installed leader. Wall Street and the City of London (actually all stock markets in the BE) are the biggest criminals and robbers of the world, especially the so-called hedgefunds and the tax resorts of the rich.

Also, the BE is to blame for the destruction of the Middle East, where whole countries who resist have been wiped out by wars up until today. The countries who did comply are partly occupied by US military bases, just in case they are up for another war. Lebanon is impoverished by the criminal gangs of the rich from KSA and BE who robbed the country and protect their immense wealth in tax havens created by the BE. Afghanistan, Iraq, Libya, Yemen, and Syria were destroyed by the BE for not complying.

The world is now at a turning point, and the big powers such as the USA, China, Russia, and India have established the rise of the new “New Silk Road or Belt and Road Initiative“, which is a global development strategy adopted by the Chinese governmentin 2013 involving infrastructure development and investments in nearly 70 countries and international organizations in Asia, Europe, and Africa. Poland, Greece, Italy, Portugal, Austria, Luxembourg, and Switzerland have already joined and practically left the sinking ship of the BE.

In the coming period, we will be bombarded with fear and “fake news“ accusations against China and Russia, who are the biggest participants in the BRI or New Silk Road. The media corporations and politicians will do anything that the BE dictates to create hate and fear, but if we stand together and wake up, then the New World Order of the BRI countries will be better for us humans. Their first priority will be healthcare for everyone and transforming Africa into a new “human“ society.