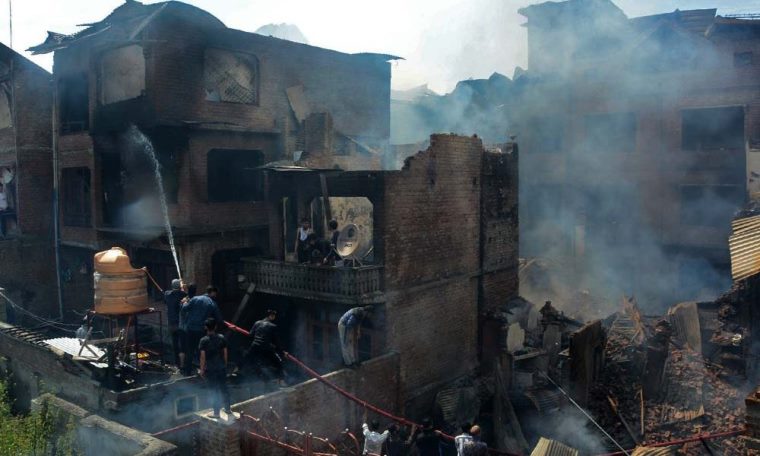 At least fifteen houses were destroyed in the gunfight between militants and the government forces in the Kanimazar neighborhood of Nawakadal area of the capital city today, locals told The Kashmir Walla.

In the gunfight, two militants were killed, including Junaid Sehrai, the son of Tehreek-e-Hurriyat chairman Ashraf Sehrai. Three personnel of the Central Reserve Police Force (CRPF) along with one policeman from the Special Operation Group were injured during the gunfight.

“At least fifteen houses were destroyed in our neighborhood,” said an old man.

A group of women was consoling a woman standing in the alley of the Kanimazar neighborhood. She owned one of the burnt houses. Last night, when the joint team of the police and Central Reserve Police Force (CRPF) zeroed-in in the neighbourhood, they knocked on her door, she told The Kashmir Walla. “I told them there are no militants here. You can come inside with me and check my home,” she had said, and further pleaded, “but I’m a poor person, forgive me.” But the forces’ personnel kicked the door of her house, she said and asked the family to stay outside. “They beat up my two children and said, ‘No, the militants are inside.’”

“I had my small children with me,” she said, “but there was nothing inside–nothing.”

At about 2 am, last night, the forces also knocked the door of Bilal Ahmed Rah, he told The Kashmir Walla. “They [the government forces] asked us to get out saying, ‘Don’t worry,’” he said. “Then we sat outside in the alley but they asked us to go somewhere else and not worry.” He spent the night in another house; when he returned to his home today morning, “we didn’t find our locker,” Mr. Rah said, standing inside the vandalized room of his home. “Everything was gone — our cash and jewellery, everything.”

After the gunfight was over, the government forces withdrew at 2:15 pm. Last night, the gunfight started after a joint team of the police and CRPF launched a cordon and search operation in the Kanimazar area. After the joint team approached the suspected house, officials said, the hiding militants fired upon them, triggering off gunfight. Though, the operation was suspended due to darkness last night and resumed early in the morning.

Two AK-47 rifles and other arms and ammunition were claimed to have been recovered from the killed militants.

Meanwhile, mobile phone services — except government-run BSNL — were suspended in the capital city.

Reference: https://thekashmirwalla.com/2020/05/srinagar-gunfight-at-least-15-houses-destroyed/
This article is originally published in Kashmir Walla.