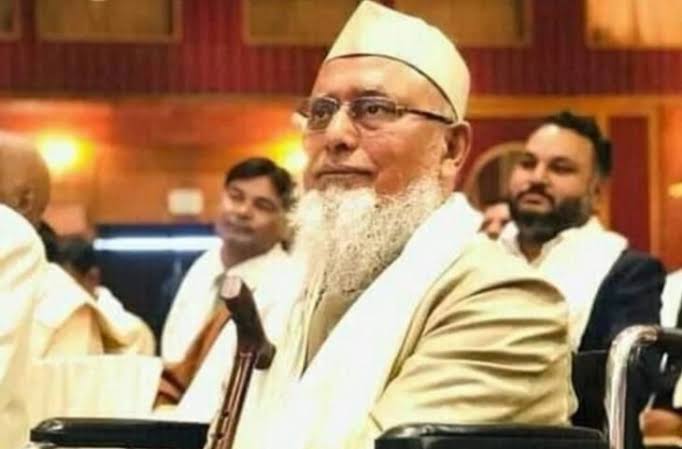 Sheikh Waheeduz-Zaman Kairanavi (1930-1995) was one of the few exemplary teachers of Arabic language and literature whom the 20th century witnessed in India. During his long teaching services at Darul Uloom Deoband, not only he trained his students how to speak and write eloquent Arabic language; but he also trained them how to live an ideal life in the society as a good human being. He educated them in the way that wherever they went, they became the cause to enhance the glory and reputation for him and for their seat of learning, i.e. Darul Uloom Deoband. He always encouraged his students and wished to see them at the peak of success. Whenever an opportunity of exposure and publicity came to him, he always pushed his students forward to let them prove their mettles. In 1982, when there was a vacancy for Chief Editorship of Arabic Islamic fortnightly Magazine, Al-Daie, published from Darul Uloom Deoband, he preferred one of his capable and qualified students, Sheikh Noor Alam Khalil Amini (1952-2021), then the teacher of Darul Uloom Nadwatul Ulama, Lucknow to take this important responsibility. Later, the scholars of Arabic language and literature witnessed how ideal this choice was!

Sheikh Amini started his services as the chief editor of Al-Daie and the teacher of Arabic literature at Darul Uloom Deoband from 15th Shawwal 1402 AH (6th August 1982). As the chief editor, he published the first issue of the magazine on 7th Muharram 1403 – 25th October 1982. He worked tirelessly for 40 years (1403-1442 AH) as the chief editor of the magazine. His standard Islamic, academic, literal and thoughtful write-ups for Al-Daie, in a well-expressed and eloquent Arabic language, enhanced the beauty of the magazine. Moreover, collecting the standard and thoughtful articles by Arab writers and the excellent publication of Al-Daie in accordance with his amazing fervor, the magazine took no time to reach the peak of its success. Not only the Indian sub-continent scholars, but also the Arab scholars, poets and the men of letters welcomed the magazine with open arms. Thus, the magazine played a key role, as a mouthpiece of Darul Uloom Deoband, in introducing Deobandi thought (Which is strictly following the path of Ahlus-Sunnah Wa-Al-Jamah) and presenting the institution’s academic activities in the Arab world.

Sheikh Amini used to write for the columns like Kalimatul-Muharrir, Kalimatu-lAdad, Al-Fikr Al-Islami, Ilaa-Rahmatillah, Isdaratun-Hadithah and Ishraqah in an eloquent Arabic language in the light of reliable references and accurate statistics. For the Kalimatul-Muharrir, it was his practice to write a brief article on current issues related to India or the Muslim world containing one or two pages sometimes. At the end of the article, there used to be written [Al-Tahreer] in the brackets. Next to it, the time and date were noted to let the readers know at what time and date the article was written. It was his practice to write the time and date at the end of his any write-up.

For the second column: Kalimatul-Adad, mostly he wrote a detailed article on a social, political or Islamic burning issue. The article sometimes was on virtues of the month of Ramadhan and fasting-Sawm, greatness of the migration of the prophet Muhammad (SAWS), need and importance of prayer etc. Article of this column sometimes revealed the cunningness of America and its illegitimate child, Israel. He also used to show up the positive and negative aspects of the steps taken by the leaders of the Muslim and Arab world. He never hesitated to express his opinion about the stand and the decisions of the Indian government on any grave issue. The article would consist of 5/6 pages and sometimes even more pages than that. The Urdu translation of some of the articles written for this column is now part of his Urdu book “Kiya Islam Paspa Ho Raha Hai?”

He had great love for the scholars of Deobandi school of thought as they were true flag bearers of Islam. It was his mission to introduce their academic works and prominent services for Islam in Arab world. For this purpose, he translated Urdu books of those prominent scholars and published on the pages of Al-Daie in parts under the column of Al-Fikrul-Islami. This series continued for many years. In this way, he translated dozens of books into Arabic language. The books are published from Darul Uloom Deoband and its Sheikhul Hind Academy. For few years, he had stopped writing for the aforesaid column. For this column, Abu Aaidh Al-Qasmi Al-Mubarakpuri (the patronymic of the famous Islamic scholar and teacher of Darul Uloom Deoband, Sheikh Muhammad Arif Jameel Qasmi Mubarakpuri, who is Assistant Editor of Al-Daie too) is translating “Tafseere Usmani” nowadays. This is a great and well-known Quranic commentary (Tafseer book) of Allamah Shabbir Ahmad Usmani (May Allah grant him Jannah!). As of Shaban 1442, the translation of the first 4 parts has been published under this column.

Sheikh Amini also wrote hundreds of articles for the column, “Ilaa-Rahmatillah”. Under this column, he wrote on famous scholars, thinkers, preachers, poets, men of letters and social and political personalities who had passed away in the near past from the Indian sub-continent as well as Arab world. In this article, he used to write the account of the deceased’s life, his services and the scholarly works etc. Like his other articles, the article of this column also had distinctive method as well as uniqueness and singularity of expression. The article would encompass all the features of the life of the diseased. The article used to be very lengthy. Sometimes, it was like a short biography of the diseased. He wrote on almost three hundred personalities as of March 2010.

Some articles written for the said columns were translated into Urdu language by the author and by some of his students and got them published in various Urdu magazines and newspapers. The readers liked them very much. They showed their desire that these Urdu articles should be compiled in the form of a book. Considering the sentiments of the readers, the author published the collection of 37 articles namely “Pase Marg Zindah” in 932 pages in May 2010. Of the same series, another collection of 24 articles namely “Raftagane Naa-Raftah” is soon to be published.

Under the column of “Isdaratun-Hadithah”, he used to write a review on newly published books. His review too was very inclusive, comprehensive and lengthy. In this column, he used to elaborate the value of the reviewing book, its publication, introduction of author and his works in detail. As an example, the review of “Tohfatul-Alma’aee Commentary of Sunan Al-Tirmidhi” of Mufti Sa’eed Ahmad Palanpuri (Rahimahullah) can be read. This review is published with Tohfatul-Alma’aee, at the end of the 8th volume of the book.

The column: “Ishraqah” was on the last page of the magazine. Its remainder part used to be published on the last pages just back to the last one. For this column, Sheikh Amini used to write a well-grounded and demonstrative article, be on academic, religious, social or political topic, in the light of his thought, knowledge, experiences and observations or some situations and incidents influencing him. It was decorated with applicable idioms, appropriate synonyms, and beautiful similes. This article used to be the sample and model of an eloquent Arabic literature. It was highly valued and appreciated not only by the Indian readers of Al-Daie, but also by Arab scholars. It is pleasing that the hundreds of articles written for this column have been compiled and published this year namely: “Min Wahyil-Khaatir” in five huge volumes. It consists of 2600 pages as a whole. It was published just few weeks before the sad demise of Sheikh Amini. It is a precious and valuable gift for those who have interest in Arabic language and literature to read.

It is appropriate to record here that before the publication of Al-Daie, Darul Uloom published a quarterly magazine namely “Dawatul-Haq” as its mouthpiece, under the editorship of Sheikh Waheeduz-Zaman Kairanavi. After abolishing its publication, “Al-Daie”, a fortnightly magazine, was launched. Its first issue was published on 11th Rajab 1396 (10th July 1976), under the editorship of Sheikh Mufti Badrul Hasan Qasmi (ex-teacher of Darul Uloom Deoband and currently resident in Kuwait). Following his resignation, Sheikh Amini was appointed as its Chief Editor and the teacher of Arabic literature at Darul Uloom Deoband as stated above. Previously Al-Daie was published as a fortnightly magazine; but the governing body of Darul Uloom decided to convert it into monthly. Then from Safar-Rabiul Awwal 1414 AH (August 1993), it is regularly published as a monthly magazine.

May Allah accept the efforts of Sheikh Amini and grant him His choicest place in Jannah! Aameen!

The writer is an Islamic Scholars, alumnus of Darul Uloom Deoband (World’s largest Islamic seminary). Currently he is a teacher at Moon Rays Trust School, Zambia, Africa. He can be reached to qasmikhursheed@yahoo.co.in