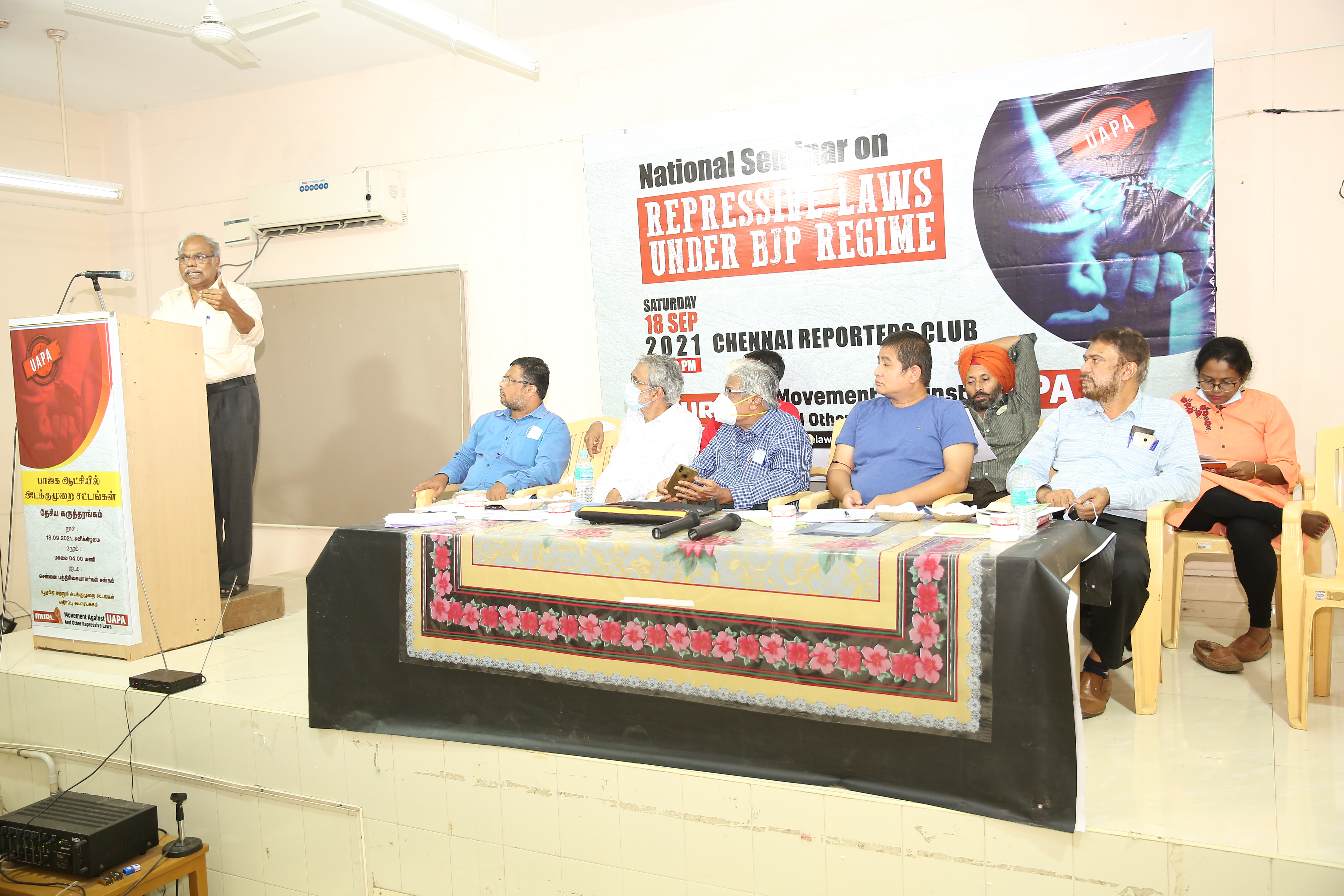 The Movement against UAPA and other Repressive Laws (MURL) has organized a National Seminar on REPRESSIVE LAWS UNDER BJP REGIME on Saturday, 18th September 2021 evening from 4:00 to 6:30 pm at Madras Reporters Guild,  Chennai.   The programme was attended by hundreds of activists. The seminar called upon all sections of the society, especially those groups targeted by the present BJP government, to fight together for the repeal of all repressive laws.

Movement Against UAPA and Other Repressive Laws (MURL) is a joint platform of activists and groups for mobilizing public opinion against these laws. MURL aims to extend support to the innocent victims of these draconian laws due to political vendetta. The seminar was part of series of activities by MURL to strengthen the efforts towards repealing all repressive laws like UAPA, AFSPA, PSA, Sedition Law, NIA Act, PMLA, & NSA which are grossly misused to suppress the voices of dissent.

Prof. A. Marx, Chair Person of NCHRO and State President of MURL, Tamilnadu, reiterated that UAPA and all other repressive laws are against the letter and spirit of the Indian constitution. As responsible and law abiding citizens it is the duty of every Indian to defend the constitution by fighting the draconian laws that are against the constitution. He called upon all activists and groups to come together putting a stronger fight.

Singh Juj a farmer leader from Punjab, said that the Government of India by making anti-people laws, is openly violating the rights given by the Indian Constitution. The laws that have been made against the farmers by the Government of India completely violate of the rights of the farmers and the farmers have been running a movement for a long time. Efforts are being made against them through black laws and to arrest them in false cases. He demanded the withdrawal of three anti-farmer laws, as well as the withdrawal of all those oppressive laws.

Adv. K.P. Mohamad Shareef (Central Committee member, MURLM) highlighted one of the less discussed law called Prevention of Money Laundering Act (PMLA). He enumerated various repressive provisions contained in PMLA, some of which are more dangerous than the procedures of other repressive laws. The main threat contained in the PMLA is that both powers of investigation and adjudication are being given to a single agency which ultimately leads to deeper misuse as we are now witnessing in present India.

Ashish Gupta, journalist and social activist from Delhi, said that under the UAPA Act, such people are being prosecuted who raise the voice of the people and write for their rights. Bhīma Koregaon and the anti-CA movement are living examples in which the government has put them in jails by making fake cases to suppress the voice of their opponents.  All these black laws can be removed only through mass movements.   He demanded that the Government of India should immediately abolish all such laws,

Adv. Bavani Ba. Mohan, State President of NCHRO stated that at present the BJP has become very strong. They are leaving no stone unturned to misuse every law available against their opposition and the dissenting organizations and individuals. Now an individual can be arrested under UAPA even on an accused intention. The sad part is that even our MPs and MLAs are unaware of the dangerous depth of these laws.

Ms. Pallabi Ghosh, a rights activist from Assam said that under AFSPA, many powers have been given to paramilitary forces who indiscriminately violate human rights. This law is depriving people of their rights in the provinces of the North East.   Irom Sharmila sat on hunger strike for 16 years to remove this law, yet the government remained unmoved. She demanded the Government of India that the black law AFSPA should be removed from the North-East regions with immediate effect.

Mr. Sandeep Nimesh, a rights activist from Uttar Pradesh, explained the manner in which anti-incumbency people are being targeted by imposing sedition sections in the country.  Uttar Pradesh is in the forefront in this matter where the ruling BJP government has imposed sedition cases on protesters indiscriminately as a means of suppression.

Mr. Rajesh Ningthoukhongajam, a rights activist from Manipur from Manipur explained  the use of AFSPA for the last 53 years in Manipur, which grants the Indian armed forces special powers to kill on mere suspicion, search without warrant, destroy property,  institutionalize impunity, blatantly violate the rights to life, right against torture, right against arbitrary detention and right to fair trial.

Demanding to release all political prisoners across India who have been put behind the bars as part of political vendetta.

Expressing condolence on the demise of Maulana Mohammed Wali Rahmani who was chairperson of MURL and the institutional murder of tribal rights leader Father Stan Swami who was jailed without granting bail.

How did Dr Raihan build such a big hospital in Baraut, Uttar Pradesh?

Truth can never be falsified. Today Interpol did it, Tomorrow whole world will: Dr Zakir Naik

Judgment of Supreme Court on triple talaq is against Muslim women: Shahnaz Anjum