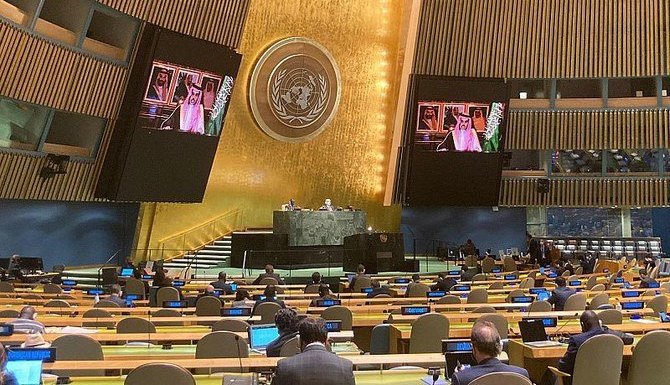 LONDON: Saudi Arabia called on the international community to assume its responsibilities toward Iran’s continued violations of international agreements related to its nuclear agreement.

Foreign Minister Prince Faisal bin Farhan called for pressing Tehran over the escalation of its nuclear activities, including in research and development, which contradict the regime’s claim that its nuclear program is for peaceful purposes.

Speaking during a high-level meeting at the UN General Assembly on the International Day for the Total Elimination of Nuclear Weapons, he told delegates in New York that the Kingdom supports international efforts to ensure Iran does not possess nuclear weapons in the short and long term, and prevent it from diverting the peaceful use of nuclear energy for military purposes.

“Establishing international peace and security is not achieved by possessing weapons of mass destruction, but through cooperation between countries to achieve development and progress,” Prince Faisal said.He said Saudi Arabia called for the abolition of all nuclear weapons.Prince Faisal added that despite international consensus and a regional desire to establish a Middle East free of weapons of mass destruction, “unfortunately Israel still refuses to accede to the Nuclear Non-Proliferation Treaty and to subject its nuclear facilities to the comprehensive safeguards system of the International Atomic Energy Agency, which contradicts the international resolutions.

Prince Faisal said the Kingdom was working closely with the international community and Kuwait, which will host the 10th conference to review the proposed NPT in January 2022.