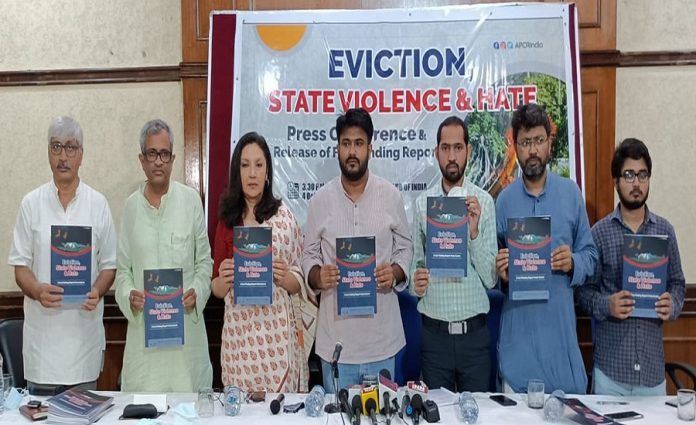 The police made unprovoked attacks and used excessive force against displaced people in Darrang district of Assam, causing two deaths and many injuries, a fact-finding report by the Association for Protection of Civil Rights (APCR) has concluded.

A fact-finding team of APCR recently visited Dholpur area of Darang district in Assam which saw the unfortunate incidents of forced eviction and Police brutality last week. The team comprising social activists, journalists and researchers collected the facts and eyewitness accounts on the ground.

According to the report, the police and the administration, on its part, blamed a “large mob” for attacking them with “sticks and stones”. They said that following negotiations at the eviction site, the residents were assured rehabilitation and other alternate measures. Convinced with the assurances, they had started dispersing to collect their belongings before leaving the area. Suddenly, over a hundred people attacked the police party with sticks and stones. They ﬁrst ﬁred tear gas shells and rubber bullets to disperse them. When it didn’t deter them, they ﬁred live bullets in self-defense.

However, the majority of the residents contested the government’s claim that they were given adequate warning. They said the eviction notices were served less than 24 hours before the government drive began. They also said that even though the people agreed to leave, the police got reinforcements and attacked the people who were evacuating their homes. The families of Moinul Haque and Shaikh Fareed, who were killed, as well as those who were injured, recounted that the police personnel started attacking them unprovoked.

The fact-finders found that no representatives of the district administration or the state government have visited the aggrieved family as yet to console them and share their grief, leave aside oﬀering a compensation.

APCR said that the eviction drive needs to be seen in a broader political context of the Assam government under Himanta Biswa Sarma using to pretext of removing “encroachment” to target the state’s Muslim minority. This is evident from the fact that, since before the 2021 Assembly elections in Assam, Sarma’s politics has involved a deliberate process of alienating and ‘othering’ the state’s Bangla-speaking Muslims.

The report noted that while the government has issued permanent land titles in 2019 to “indegenous” people who have lived in a particular piece of government land for over three years at a stretch. But only “indigenous” families were eligible for this. However, the Muslim families has been living in the riverine area of Dholpur since 1965 are still termed ‘encroachers’ and ‘Bangladeshis’.

The report was released at a press conference on Monday, where members of the fact-finding time spoke to the media persons.

Adv Sanjay Hegde, lawyer at Supreme Court of India, “The recent incidents shows how State is willing to use disproportionate force to quell the protest whether violent or peaceful. Rule of law is replaced by the rule of guns.”

Autor and writer Farah Naqvi said, “The Assam incident shouldn’t be seen in isolation. This is the manifestation of systemic injection of hate across the country. We have crossed the rubicon where acts of violence are from the state government itself not from any mob.”

Nadeem Khan, Secretary, APCR, pointed a series of lapses in the due process that should have been followed prior to eviction, creating to a frenzy panic situation that led to the tragic incident. “We will approch court for rehabilitation of the families evicted and the others who are on the verge of it,” he said.

Salman Ahmed, President, Students Islamic Organisation of India (SIO) said, “The government is trying to paint a picture of normalcy in Assam, and was restricting the visit of people at the evacuation site. The situation is very deplorable and the government is shrugging away its responsibility of immediate relief work.”