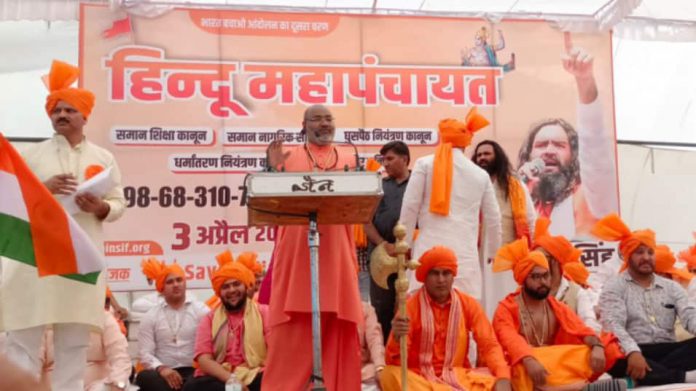 On April 3, 2022, a Hindu Mahapanchayat was held at Burari, New Delhi, where open calls for taking up arms were given. At least five journalists were allegedly assaulted in the process of covering the event. In August 2021, too, there was a similar event after which the organizers of the current event, Preet Singh and Pinky Chaudhary, were arrested for hate speech.

Yati Narsinghanand and Suresh Chavankhe, who were previously in the news for giving a call to arms in ‘protection’ of the Hindu religion, were also present at this event. There was a literal call for genocide against Muslims.

Yati Narisnghanand can be heard in a video of the event saying “If a Muslim becomes the prime minister of India, in the next 20 years, 50% of all of you will change your religion…40% of Hindus will be murdered. Ten percent of Hindus will give their sisters and daughters to Muslims, will live in refugee camps or abroad”. He was arrested previously for the Haridwar assembly and then granted bail, on the condition that he wouldn’t speeches disrupting communal harmony.

Against this incident, human rights organisation the National Confederation of Human Rights Organisations (NCHRO) wrote a letter to Police Commissioner of Delhi, urging them to take action against the perpetrators.

The letter was submitted on April 06, 2022 by Adv. Ashutosh Kumar Mishra, the Vice President of the Delhi chapter of NCHRO.

We have urged the authorities to take the case seriously and take prompt action.