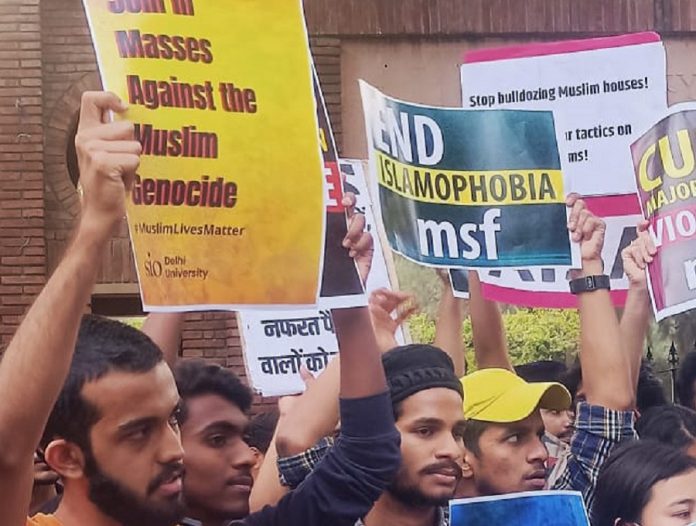 Students Islamic Organisation of India (SIO) has termed the coercive ramming down of Muslim properties and places of worship in Jahangirpuri and other places is “a vengeful abuse of state power”.

The organisation, alongwith other student groups including Fraternity Movement, Muslim Students Forum, Campus Front of India, All India Students Association, bsCEM and KYS protested against the demolition at Delhi University. Around 100 students had gathered at the Gate No.4 of the university’s Arts faculty with placards and raised slogans against the high-handedness of police and administration.

Following the vengeful bulldozing of Muslim properties and Jama Masjid in Delhi’s Jahangirpura, a delegation of SIO and Jamaat-e-Islami Hind national leaders visited the area. While they were prevented from visiting the demolished sites, they inspected the mosque and surroundings and met with the residents of the locality.

SIO National President Mohammad Salman Ahmad said, “The coercive ramming down of Muslim properties and places of worship in Jahangirpuri and other places is a vengeful abuse of state power and an appalling naked display of vitriol. The sheer trampling of due process hints at the onset of an apartheid regime. SIO calls for a collective fight against this mockery of justice and bulldozing of our societal conscience. We will continue to stand with all who resist this brazen abuse of state power.”