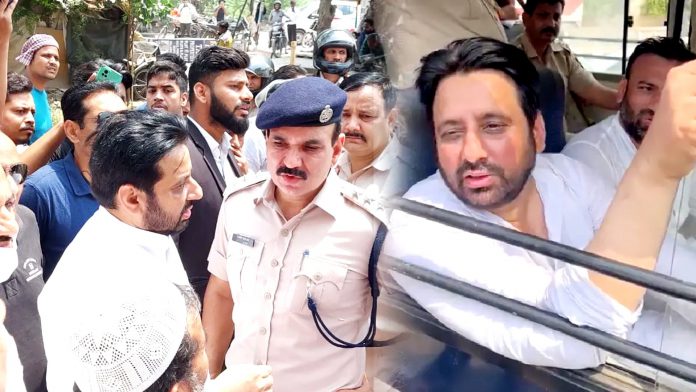 New Delhi: Aam Aadmi Party (AAP) leader Amanatullah Khan has sent a legal notice to the Delhi Police through his lawyer demanding an “unconditional public apology” for allegedly violating his and his family’s “fundamental rights”. Khan, an MLA from Okhla, was recently arrested during an anti-encroachment drive in Madanpur Khadar and had earlier been declared a “bad character” by the Delhi Police. He is currently out of jail on bail.

“Delhi Police is constantly targeting me. This time Delhi Police attacked my right to live with dignity besides defaming my family. Delhi Police is weaving imaginary stories about me without any evidence,” Khan tweeted Sunday sharing the copy of the notice.

The legal notice sent to Delhi Police Commissioner on Saturday by Khan’s lawyer demanded an “unconditional, written, public apology” to his wife and children allegedly for “brazen infraction” by the force of their fundamental rights.

The notice claimed that Khan, who is also the chairman of Delhi Waqf Board, was “peacefully” protesting against the anti-encroachment drive by South MCD in the interest of the local public on May 12.

The proposal for declaring Khan a “bad character” was sent on March 28 by the Jamia Nagar Police Station in Southeast district and was approved on March 30.

A total of 18 FIRs have been registered against him, the document said.

According to the police, a person who has involvement in several cases, including that of murder and attempt to murder, and can disturb peace in an area is declared a “bad character”. Police keep an eye on such people.

Khan and five others were arrested on the changes of rioting and obstructing public servants from discharging their duty hours after he took part in the protest against an anti-encroachment drive in the Madanpur Khadar area.

The drive sparked violent protests and pelting of stones, with many locals alleging that authorities bulldozed legal structures too.