Home National Kerala slogans were against RSS, not against other communities: Popular Front 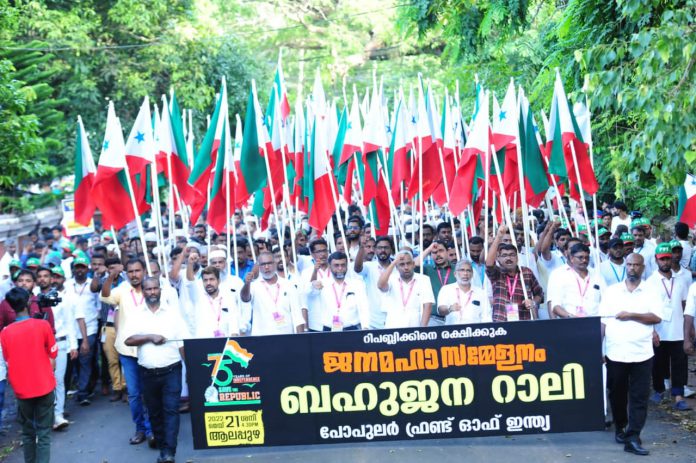 There have been organised attempts to tarnish the image of the Grand People’s Conference organised by the Popular Front of India under the theme “Save the Republic”. The conference and rally that drew millions of people had seen slogans being raised throughout the rally against the RSS and Sangh Parivar terror. Such anti-fascist slogans have been the standpoint of the organisation. Meanwhile, there are organised attempts to silence the organization under the guise of opposing the slogans raised by a child who attended the rally in Alappuzha. Some media outlets have been part of this propaganda.

The slogans raised by the child during the rally were not the official slogans provided by the Popular Front, and this has been clarified by the organisation already. The RSS and the extremist organizations they sponsor are spreading false propaganda by linking the issue with religions. No one in the rally had chanted slogans against Hindus and Christians and it is not the Popular Front’s policy or position to spread hatred against other communities. The slogans the child raised were against the RSS and the state witchhunt. Anybody who could examine the complete video footage of the slogans will come to know this. Sadly, even the Media houses chose to broadcast the edited version of the video, which was trimmed and distorted by the RSS mouthpiece Janam TV. The conference and rally held in Alappuzha were attended by millions. With the exception of a handful of media outlets, the mainstream visual media chose to blackout the event.

We will not allow the Muslim community and organisation to be hunted down over false propaganda run by Sangh Parivar. The planned moves to spread Islamophobia will be resisted. The Police that turned a blind eye to this hate propaganda and let the communal propagandists go scot-free have registered cases against the organisers of the conference for no crime they have committed. These cases are part of the ongoing Hindutva appeasement by the Kerala Home Department. The task that Popular Front has taken upon its shoulders is not something that could be stopped in the face of these kinds of fabricated cases. Law and justice must be the same for all.

The public conscience was not affected when public calls were made in the “Ananthapuri Hindu Maha Sammelan” to boycott Muslim businesses. In the same program, there was propaganda that Muslims are sterilising non-Muslims by serving them tea dissolved with castration medicines.

Those who were not shocked when communal poison was spewed for continuous four days under the cover of Hindu conferences are all now appalled seeing the slogans raised against RSS. This proves they were all carrying a Hindu-Secular-Conscience. It is dangerous that the anti-RSS slogans are getting portrayed as against some religions. This will seriously affect the social atmosphere in Kerala. The Popular Front has decided to protest against these trends by raising anti-RSS slogans throughout the State today