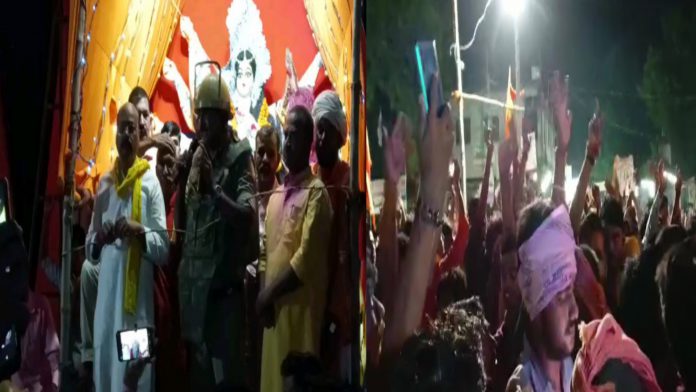 A crowd from the Hindu community during a religious procession played loud Music while passing by a Mosque, crowd ‘Brandishing Swards’ and sloganeering ‘Jai Shree Ram’.

New Delhi: On October 10, in Sultanpur, Uttar Pradesh a crowd of Hindu community took out a religious procession on the occasion of Durga Puja when the procession reached the Mosque. They started chanting provocative slogans.

According to eyewitnesses, the crowd intensified the volume of music while passing the mosque, and it was the time for Maghrib prayer.

People from the Muslim community asked the crowd to lower the volume, but they refused and started pelting stones. They vandalized the mosque and set it on fire.

An eyewitness told Millat Times, they already come with the intention of violence, crowd brandishing swords and they were provoking Muslims by sloganeering. Not only the mosque was vandalized, but the nearby shops and houses of Muslims were looted, and set on the blaze.

In a conversation with Millet Times, some of the victims disclose the incident.

Shamima, told us “I was at the Dargah when I heard about the incident I turn back home, and the crowd started pelting stones at my house, I escaped the house with my daughter from the back door. After 2 hours, I went back and saw my house was burning they set my house on fire. Whatever was left of fire was looted overnight. I have nothing the people who did this were all from the neighborhood”.

Shafiunnisa, another victim told “I and my daughter were home alone the crowd entered my house, they hit me on my head, we were beaten up badly and they robbed my house” Nisa also accused the policeman of robbery, he said the policemen were also involved in the incident.

The house of Ishrat Jahan, was also allegedly looted by the police “I have three small children, they set our house on fire. The police were completely involved in the arson and were looting further, My house was set on fire because of my Muslim identity, all the houses, and shops that have been burnt so far belong to Muslims.

We have nothing to eat in the house, no gas cylinders. Winter is on the way, now where should I go with my three small children” Another Victim Ishrat Jahan told.

Unilateral action was taken by the administration, The FIR has been registered against 52 people of which 51were Muslims

Police said, “an FIR has been registered against 52 accused in Balderai police station, and 32 accused have been arrested”.

When our team asked the circle officer (CO) about the bulldozer statement given by the police officer. He said, “Chief minister also talks about bulldozers. Can you first stop him?” He disconnected the call.

This is just another normal day for Muslims in New India, where oppression also happened to them and they are only called oppressors.